WHEREAS, Macario Sacay de Leon (Macario Sakay) was a Filipino general who continued to battle against the United States following the official declaration of the end of the Philippine-American War in 1902;

Whereas, on November 12, 1902, the Philippine Commission passed the Bandolerism Act which proclaimed all captured resistance insurgents to be tried in court as bandits, ladrones and robbers;

WHEREAS, in April 1904, Macario Sakay issued a manifesto declaring the Filipinos' right to self-determination at a time when calling for "independence," espousing and advocating the same, was considered a crime by the American occupation forces in the Philippines;

WHEREAS, Macario Sakay attempted to form his own Republic, otherwise known as "Republika ng Katagalugan", of which he was the president and Francisco Carreon as the vice president;

WHEREAS, the U.S. Government did not recognize Macario Sakay's government and thus, he was declared an outlaw under the Bandolerism Act, and despite the establishment of concentration camps by the Philippine Constabulary and Philippine Scouts in Cavite, Batangas and Laguna, this did not stop Macario Sakay and his companions to expansively fight in the Southern Luzon area;

WHEREAS, the American governor general promised amnesty for Macario Sakay and his men in exchange for their surrender and eventually, Macario Sakay was one of the last remaining Filipino generals to surrender on July 14, 1906;

WHEREAS, tricked into surrendering, Macario Sakay and his followers were arrested and executed by the American authorities as bandits;

WHEREAS, Macario Sakay was executed by hanging on September 13, 1907;

WHEREAS, today we celebrate Macario Sakay's death anniversary, and along with his fellow freedom fighters, he should be committed to our memory as an attestation of the Filipino people's love for their country, especially in the time of crisis;

WHEREAS, to pay tribute to Macario Sakay, the National Historical Institute and the University of the Philippines erected a marker at the foot of Mt. Banahaw where Macario Sakay and his troops gathered and performed their functions as freedom fighters and after one hundred and one (101) years, a life-size status of Sakay was unveiled at Plaza Morga Tondo by the Manila Historical and Heritage Commission: Now, therefore, be it

Resolved, as it is hereby resolved, To express the sense of the Senate to honor the life of Macario Sakay and his fellow freedom fighters for their contribution to fight for our Philippine Independence.

Resolved, further, That the Senate of the Philippines call on the Department of Education to work hand in hand with the National Historical Institute in order to conduct further studies and research on the personalities involved and the events which transpired during the Philippine-American War.

This Resolution was adopted by the Senate on September 16, 2008.

EMMA LIRIO-REYES
Secretary of the Senate 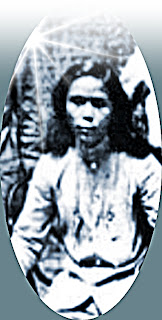 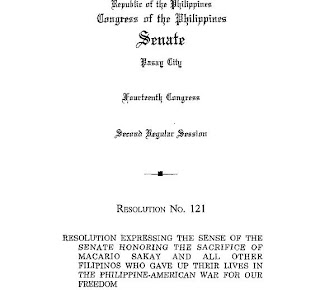 Nice place you have here, must read more.