103rd Anniversary of the Treacherous Death of Macario Sakay, President of the Revived Katipunan during the Fil-Am War

TODAY is the 103rd Anniversary of the Death of Gen. Macario Sakay, President of the Republic of Katagalugan (Philippines), the revived Katipunan during the Philippine-American War (1899-1914). 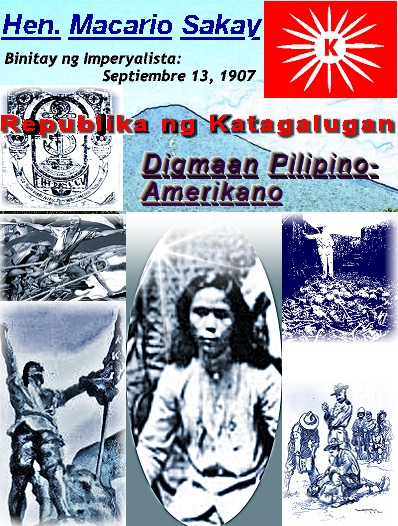 Gen. Sakay was deceived into giving up fighting the invaders on promises of independence for the Philippines and amnesty for him and his officers made by the American Governor-General. It turned out to be a trap as he and Col. Lucio de Vega were arrested and eventually taken from the bartolina to the gallows by the imperialist soldiers on September 13, 1907.

Reaching the platform at around 8:30 a.m., Sakay shouted at the top of his lungs:

“I face the Lord Almighty calmly but we must tell you that we are not bandits and robbers as the Americans accuse us, but members of the revolutionary force that defended our country. Long live the Philippines! Adios Filipinas!”

Sakay's treacherous death came quite early at age 37. For more details about this valiant Filipino hero who continued the anti-colonial aspirations and revolutionary movement of Gat Andres Bonifacio, please check the following links:

The mark of Sakay: The vilified hero of our war with America
http://www.philstar.com/Article.aspx?articleid=398995