Overview of the National-Liberationist People's War in the Philippines

THE old merger party of the Communist and Socialist Parties founded the People’s Army against Japan (Hukbalahap) in 1942. This army became the Hukbong Mapagpalaya ng Bayan (People’s Liberation Army) in 1948 in order to resist the continued US domination of the Philippines under the US-RP Treaty of General Relations and the Parity Amendment of the Philippine Constitution and the return of the landlords to Central Luzon where the people’s army was based.

The backbone of the HMB was broken in the early 1950s. The semicolonial and semifeudal character of Philippine society seemed to be perpetual and invincible. The exploiting classes of big compradors and landlords blocked every attempt to uphold national sovereignty and carry out genuine and thoroughgoing land reform. In 1957 the reactionary government enacted the Anti-Subversion Law to punish by death officers of the Communist Party or any organization acting as its successor or front.


I. Revival of the National Democratic Revolution

I was among those who revived in the 1960s the mass movements of the workers, peasants and the youth under the leadership of the old merger party of the Socialist and Communist Parties. The ruling system was extremely oppressive and exploitative. We conceived of the national democratic revolution to oppose the system. We were not afraid of the Anti-Subversion Law.

We engaged in mass work to arouse, organize and mobilize the masses. We came under surveillance. We were blacklisted, subjected to propaganda attacks and removed from our jobs. Our mass actions were often disrupted and attacked.

Within the merger party of the Communist and Socialist Parties, the question arose whether to prepare for revolutionary armed struggle or not. The old merger party took the position of carrying out the legal mass movement indefinitely until such time that conditions were supposed to ripen and allow a general uprising.

I was among those who took the position that people’s war must be started on the basis of the already existing mass base in the rural and urban areas. We left the old merger party to re-establish the Communist Party of the Philippines under the theoretical guidance of Marxism-Leninism-Maoism on December 26, 1968. Three months later on March 29, 1969, we founded the New People’s Army to wage people’s war..

In 1969, Marcos spoke of the Philippine society as a social volcano about to explode. In speaking thus, he presented himself as the strong leader to head off the eruption of the volcano. He had plans of using military force to perpetuate himself in power. He expanded the armed forces and was quick to use military force to suppress any manifestation of armed resistance in the countryside. He was responsible for the massacres in Barrios Culatingan, Sta. Lucia and Paraiso.

He launched Oplan Prophylaxis in an attempt to nip in the bud the New People’s Army in 1969. But he failed. The NPA grew from only 65 members with 9 automatic rifles and 26 handguns and single shot rifles to more than 200 automatic rifles from 1969 to early 1970 in Tarlac province. Marcos put together Task Force Lawin, consisting of 5000 troops and policemen, further augmented by so-called barrio self-defense units.

Having anticipated the concentration of enemy forces where we started to build the NPA, we sent expansion cadres to various regions in order to build armed propaganda teams from the mass organizations and deploy them in the villages. When Marcos boasted of having “decimated” the NPA in Central Luzon, the NPA had developed bigger mass bases in Isabela province in another region of the country.

At any rate, Marcos proceeded with his scheme to impose a fascist dictatorship on the people. On August 21, 1971, he suspended the writ of habeas corpus and suppressed all patriotic and progressive legal mass organizations. On September 21, 1972, he declared martial law and concentrated executive, legislative and judicial powers in his hands. In his martial law proclamation he claimed that the NPA had 10,000 rifles. In fact, it had only 300 rifles at the time.

But the 14 years of fascist dictatorship generated conditions favorable to people’s war. The New People’s Army was able to grow to the level of nearly 6000 high powered weapons by the time that Marcos fell in February 1986.

Cory Aquino came to power as a consequence of the convergence of contradictory forces against the Marcos fascist regime. The National Democratic Front of the Philippines (NDFP) representing the Communist Party of the Philippines, the NPA and other revolutionary forces agreed to hold ceasefire talks with the Aquino regime. A ceasefire agreement was forged on November 25, 1986 to prepare for peace negotiations on substantive issues. 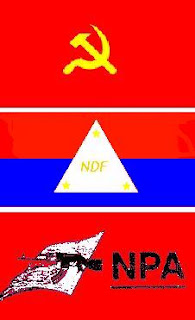 But the peace negotiations came to an end when peasants were massacred while rallying in front of the presidential palace on January 23, 1987. Instead of holding responsible her security guards for the carnage, Aquino blamed the peasants and the entire revolutionary movement and proclaimed the unsheathing of the sword of the state.

With General Fidel Ramos as her defense secretary, she launched a series of national campaign plans Lambat Bitag I, II and III designed to destroy the armed revolutionary movement. The campaign plans were described as the application of the low intensity conflict doctrine. Human rights violations became rampant in both urban and rural areas. Base-denial operations and massacres were often undertaken in the countryside.

The ultra-Left current consisted of the premature formation of companies and of unnecessary levels of command and staff which took away Party and NPA personnel from mass work. Due to this erroneous current, the mass base of the revolutionary movement decreased by 15 percent in 1988 and by 60 percent in 1991. This reduced the ability of the NPA to wage tactical offensives although in the main the NPA retained its weapons.

The rectification movement was carried out to criticize and repudiate major errors. It reoriented, reorganized and redeployed the Party and NPA for mass work and for recovering and rebuilding the mass base. It also went against the attempt of the Rightists to liquidate the armed struggle and follow the reformist example of the Soviet leader Gorbachov.

Some observers think that there was an ebb in the fighting between the NPA and the reactionary forces because of the peace negotiations. But the real cause was the decrease of the mass base and the weakening of the offensive capability of the NPA from 1988 to 1991 and the need for rectification and recovery from 1992 to 1998.

The rectification movement was successful. The mass base expanded. The NPA could launch tactical offensives in different parts of the Philippines from 1996 onwards. It was able to capture a series of high-ranking military officers, including a general.

The Arroyo regime pretended for a while to continue the peace negotiations with the NDFP in 2001. But it decided to launch Oplan Bantay Laya I and II from 2001 to the end of her rule. International human rights organizations and UN human rights agencies called attention to the gross and systematic violation of human rights and made recommendations to the Arroyo regime to improve the human rights situation in the country. The regime turned a deaf ear to all of them.

Since its inception, Oplan Bantay Laya has perpetrated the abduction, torture and extrajudicial killing of more than 1000 social activists, including trade unionists, peasant leaders, human rights advocates, religious and journalists. At the same time, the peasant masses and indigenous peoples in the countryside have been subjected to arbitrary arrests and detention, bombings and forced evictions from their land and homes.

The violent attacks on urban based social activists was calculated to demoralize and weaken the legal mass movement and cut it off from the armed revolutionary movement in the countryside. But the people’s war intensified in response to the escalating campaigns of suppression.

The present Aquino regime follows the US Counterinsurgency Guide and is continuing Oplan Bantay Laya up to January 2011. However, there is already a 5-year military plan intended to defeat and destroy the NPA. By cutting the budgets for education, health and other social services, Aquino has increased the budget for the military and made way for a huge amount of debt service.

He has also increased the budget for an agency that is intended to be the civilian arm for facilitating the forced evacuation of peasants and the indigenous people who are victims of displacements due to militarization and wide-scale land grabbing by mining and logging companies.

There are indications that the Aquino regime is not interested in peace negotiations as a way of addressing the roots of the armed conflict and laying the basis for a just and lasting peace. To date, the Manila government has not reciprocated the NDFP’s demand for the resumption and acceleration of formal peace negotiations and has not responded to the NDFP’s proposal for a Concise Agreement to End Civil War and Achieve Immediate Just Peace. This proposal has been relayed to the GRP since August 27, 2005.

The NDFP is patiently waiting for the Aquino regime to dispatch its emissaries and to form the new negotiating panel of the GRP. ###