The petition of CenPEG (Center for People Empowerment in Governance) filed last October 5, 2009 for Mandamus with the Supreme Court to compel COMELEC to release the source code for the Automated Electoral System has been recently GRANTED through a resolution dated September 21, 2010. In line with the development MIGHT e2010 has reposted the following March 17, 2010 press release by CenPEG:

Comelec Commissioner Gregorio Larrazabal should be transparent enough to admit that there is no real source code review for the coming automated elections.

The Center for People Empowerment in Governance (CenPEG) thus said today as it took exception with a recent statement by Larrazabal lamenting that political parties and othergroups cannot review the election source code for lack of “competent” IT specialists.

“Comelec should not use as scapegoat claims that parties had no qualified specialists,”CenPEG political analyst Prof. Bobby Tuazon said.

Representatives of the major political parties along with CenPEG and AES Watch in a Feb. 19 joint statement declined participation in Comelec’s “source code review” not only for the restrictions but also because it was a farce, Tuazon said.

Comelec was planning a “walkthrough” which is a mere presentation of the “read-only”findings of a review done by U.S.-based SysTest Lab so CenPEG and other groups refused to participate, Tuazon said.

In a recent statement, Larrazabal said that “it is not the poll body's fault that the parties had no qualified specialists who would be able to review the software”.

In fact, Tuazon said, as early as June last year CenPEG had pooled 20 IT specialists and academics from UP, Ateneo, and DLSU in preparation for the source code review. Institutions such as the UP College of Law and other computer facilities of the three leading universities had been offered for CenPEG’s review, he said. 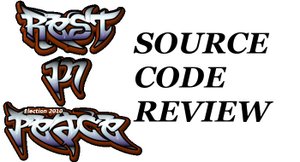 “They were going to do it pro bono,” Tuazon added.

Comelec and Smartmatic last October had the source code and systems of the automated election system reviewed by SysTest for PhP70 million. The review lasted four months.

SysTest’s license to certify election systems had been revoked by a U.S. government agency in 2008, reports said. It was returned in 2009 on condition that the company did something about its lack of competent reviewers, among others.

Comelec should be answerable for any incidence of fraud and other election irregularities that are directly attributable to the absence of a real source code review, Tuazon said.

Source code is the human-readable software that will run Smartmatic’s 82,000 PCOS machines and thousands more canvassing equipment on May 10. An effective source code review can be done for at least four months. The review is needed to identify malicious codes, check whether the system complies with Philippine election laws, and do modifications.

Section 12 of the election law, RS 9369, requires that the source code review by independent parties and groups be done as soon as the election technology is available.This should have been at least when the contract between Comelec and Smartmatic was signed in June 2009.

In a formal request in May last year, CenPEG asked the Comelec to make the source code available. Although the request was approved by the Comelec en banc in late June,the source code has not been released to CenPEG, Tuazon said.

CenPEG filed a petition for mandamus with the Supreme Court on Oct. 5 to compel the Comelec to release the election software .Finding the Comelec guidelines for the “source code review” too restrictive, representatives of the citizens watchdog AES Watch, CenPEG and IT representatives of the Nacionalista Party, PDP-Laban, Ang Kapatiran, Makabayan coalition, and the office of Sen. Jamby Madrigal signed a joint statement last February calling on the Comelec for a real source code review.

Comelec officials had admitted a number of times that the poll body does not have the source code. Dominion Systems, a U.S.-based Canadian company, owns the source code and has a licensing agreement with Smartmatic for its use.