(For those who would read this post, do keep those injured by yesterday's bombing in your prayers, especially Ms. Raissa Laurel and another whose name I am unaware of, who are reported to be the most seriously injured and stand to lose their legs.)

Many, I included, thought at first that it was an extremely loud firecracker; in the nanosecond that it took me to realize that it was louder than most firecrackers, had an echo and that it shook the ground hard, a hush had descended over Taft Avenue.  Where, just seconds ago, there was loud cheering, drums pounding and people shouting, there was now an incredulous, unbelieving, surreal silence while people, I and the UP Law contingent included, started to slowly push backwards.

It was 5:00 in the afternoon, 26 September 2010.  The Bar Examinations of 2010 had officially ended, and the traditional Salubong [greeting and receiving of Bar examinees after last day of exam] was in full swing.
That was when the screaming started: from those on the pavement--mostly women, some half-seated, some lying prone--almost all bloodied--and from those who were scrambling to move out of the way.

That was when it dawned on many, me included, that the Bar Examinations 2010 Salubonghad been bombed.

My first concern was the UP Law contingent which included our guests, the drummers from the UP Pep Squad, and many students--not all of whom were known personally to me by name or by face.  I pushed back some physically to secure places and ordered others to retreat to the nearby McDonald's and stay there; grabbing hold of students I knew were leaders and/or part of  the UP LSG [Law Student Government] as well as my team members from the 2010 Bar Operations, I asked them to make an immediate head count--ask where their companions were, and if they were not physically at McDonald's, to account for where they were; some, like Tim, who was at Starbucks, called in helpful information as to who was there with them.

My second concern was for the parents, alumni, guests and friends whom we did not know personally but whom we knew would be there at the Salubong.  Those parents I knew (or had gotten to know through the four weekends of the Bar), I asked to just stay put at McDonald's. 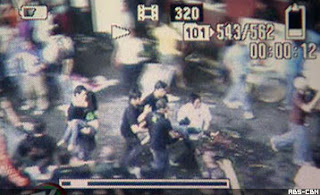 My third concern was our bar candidates and our contact, Dan Sebollena, who had gone ahead to be closer to the exit gate so that the bar candidates could march out at the same time. We needed to also make a head count before they left, so we would be able to trace where people were because some had left ahead of the agreed upon 5:00 p.m. march out.

All throughout, while this was happening, there was a mad rush of people and muted whimpers, crying, and a general disbelief at what had just happened (though some, tastelessly, continued to cheer and even spray beer and other liquid) even as the police secured the area and carried off those who were wounded.

Looking at the crime scene (while the head counts were being taken) and the bomb blast site, I realized that if the bomb had gone off a few meters to the right, it would have hit UP Law people.  It was that close, and we were that blessed.  As I looked at the bloodied Taft Avenue, with UP Law pennants, fans and tarpaulins and with undistributed flowers strewn all over, I silently thanked God for protecting us even as I prayed for those who were injured.  Even now, as I write this, frantic appeals for blood donations are going out for Raissa Laurel, who faces the prospect of losing her legs as she undergoes surgery at the PGH. (Editor's note: As of posting time, both of Laurel's legs had already been amputated. Click here for story.)

It took us about an hour to account for all our people.  By that time, night was falling and my concern now was to get people home before night fell because the darkness could provide yet another venue for opportunistic criminals to strike.  We moved out in delegations--classmates, sororities, fraternities, the bar candidates and their families, other supporters.  Many stayed for a while at the nearby Starbucks to catch their breath or to simply shake off the disbelief.

That night, as we processed the raw information coming our way through various sources, it became clear that it was related to fraternity rumbles between rival fraternities of a Manila-based law school. Some had seen men in black running away a few seconds after the sound of the explosion. Others fed raw information about the rumbles that were on-going among several fraternities of some of the schools in the university belt.  All of us in that room, didn't find the news surprising as much as shocking.  Many of us knew just how stupid and senseless fraternities can get when it comes  to proving their manhood and their brotherhood to each other. But that night, a new realization came to me--probably also to the others in the room--the savagery of these "Greek-lettered men," who beat each other and others to a pulp, had transcended known civilized boundaries.

There is no justification for lobbing an explosive into a densely packed crowd of people who are oblivious to nothing but cheering for their friends, schoolmates, family and loved ones. Absolutely none.

There is nothing anyone can say to me that will convince me that one who would throw an explosive into a crowd did not deliberately plan to kill other people. Absolutely none.

It was an act done with malice, with premeditation, intentionally with the purpose of inflicting mortal harm.

That Ms. Laurel and the others did not die is a testament to Divine Intervention; that Ms. Laurel will probably end up a cripple is directly attributable to the cowards who hide behind the cloak of Greek letters and the skirts of their "brods."

As one of our students, a frat man himself, has pointed out in his blog posts, it is time to go beyond words and condemnation, and it is a time for more concrete action. I agree.

The fraternities at war yesterday must make the first move: surrender those responsible so that they may be prosecuted.  Otherwise, they reduce ALL Greek-lettered societies, many of them legitimate,  to nothing better than street gangs and organized criminal syndicates.

Other Greek-lettered societies must also do the right thing: more than just condemning the act and saying that "we don't do things like that", they must ensure that in admitting people into their ranks, they are absolutely certain that those with issues, those with homicidal streaks, those with anger management problems, those who are in fraternities for the absolutely "wrong reasons" should not be admitted; and if, somehow, some of these have made it into their number, that they are courageous enough to ensure that they are not let out into decent company, unless on an extremely short leash.

The culture of "my brother, wrong or right" must stop. There is such a thing as fraternal correction and, if necessary, discipline. The Supreme Court, which is in charge of legal education, and the universities and colleges must also take steps to ensure stricter regulation (I do not believe in prohibition as the fraternities will simply go underground and be totally unchecked), on pain of stringent sanctions, including expulsion and criminal prosecution, if warranted. The solution is not  a reflexive reaction of banning the Salubong, but perhaps ensuring that school fraternities' activities during the Salubong are regulated and monitored.  For some fraternities, adult supervision might be required; perhaps, for those fraternities, the dean of the law school needs to be required to be personally present at the Salubong.

September 26, 2010 will enter the history books as the day when the Bar Examinations were bombed and blood was spilled. For a country with notoriously short memories, this day should not be forgotten because it was the day that evil visited the Bar.

Lobbing an explosive at a crowd filled with innocents goes beyond the limits of stupidity, transcends the parameters of senselessness and breaches the borders of barbarism.  Plainly and simply, it was evil.

I recall what our dean said during the last Saturday evening Mass at the Hotel, as we sent off our candidates with the Lord's blessings.  Not known for his religious bent, the dean nonetheless, very presciently, warned  that  "Evil is disguised."  Informing our Bar candidates to be vigilant, the dean mentioned one simple truth--evil will not be revealed in the ways we expect, it will come in forms, hues, shapes and guises that we do not expect.

On September 26, 2010, evil came to Taft Avenue, bearing a bomb and garbed in Greek letters.

Fraternities--can be excessively patriarchal & open to violence & injustice owing to the 'sake of brotherhood' motto. This has got to stop.