THE International League of Peoples’ Struggle (ILPS) denounces as a complete sham and grand deception the UN call for the celebration of September 21 as an “International Day of Peace”. The UN Secretary General describes this as “a day on which armed conflicts is meant to be stilled… a day on which we appeal to combatants to observe a ceasefire… a day on which we reaffirm commitment to non-violence and the peaceful resolution of disputes.”

Nothing can be more hypocritical on a global scale than for the UN to appeal for non-violence and peace. The United Nations Organization was established in 1945 after the Second World War supposedly in response to the global aspiration to preserve peace and prevent war. But through its sixty-six years as an international agency purportedly with a mission to keep and ensure global peace, the UN has had its hands dripping with the blood and tears of millions of victims of imperialist aggression, to which it had either turned a blind eye if not supported and even vested with a cloak of legitimacy.

In November 1947, only two years after its establishment, the UN General Assembly passed Resolution 181 (II), creating the state of Israel by “partitioning” Palestine into a Jewish state and an Arab state. Pushed by the US, the partition resolution gave the larger and choice portion to the minority Jews, and the smaller one to the majority Palestinians. Instead of putting an end to the armed conflict, the resolution immediately caused its escalation and intensification, eventually resulting in the ruthless, violent expulsion of the Palestinians from their homeland.

It also set off a series of Arab-Israeli wars ostensibly over the existence of the state of Israel vis-à-vis the rights of the Palestinians to their homeland. But behind all the conflict was the aim of US imperialism to secure a foothold in the Middle East and ensure their control of oil and other resources in the region. Since then, Israel has zealously served the US as junior partner and hatchetman in the Middle East. The UN has condoned and supported Zionist Israel’s violent oppression and persecution of the Palestinians, and its military transgressions on neighboring Arab states such as Lebanon and Syria. 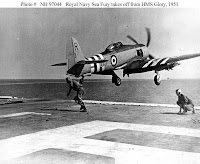 The UN also served US imperialist interests when the US attacked North Korea in 1950 and began the war of aggression against Korea. The UN endorsed the US aggression and further sent troops under the guise of “peace keeping” to fight alongside the US and South Korean armies against the North Koreans and the Chinese volunteers. It ultimately enforced the permanent division of the Korean nation through the establishment of the so-called Demilitarized Zone (DMZ) at the 38th parallel.

In 1960-61, a UN peace-enforcement contingent was sent to the Congo where its first Prime Minister, Patrice Lumumba, faced a US- and Belgian-backed rebellion in the Congolese province of Katanga. Lumumba appealed for UN and even US intervention, but the UN refused while the US continued to support the rebellion. US official documents declassified years later reveal that then US President Eisenhower ordered the CIA to “eliminate” Lumumba, after several attempts to poison him failed. The Katanga rebels eventually captured Lumumba with the help of CIA and Belgian police officers. Lumumba again appealed to the UN to intervene, but all the UN Secretary General Dag Hammarksjold did was to lamely appeal to the Katangans to treat Lumumba according to the due process of law. 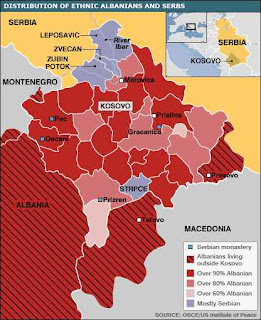 The UN did not act when US-NATO took advantage of ethnic conflict and intervened in the Kosovo war, subjecting Serbia to intense bombing in Serbia in March 1999. Instead, UN Security Council Resolution 1244 dated June 10, 1999 provided the pretext for US-NATO occupation of Kosovo under the guise of a UN mission to enforce a peace agreement. The resolution in effect legitimized the US-NATO bombings of Serbia and paved the way for the separation of Kosovo from Serbia.

Kosovo is now a US-NATO colony, with the biggest US Army base in the Balkans, Camp Bondsteel, also serving as the headquarters of the NATO Kosovo Force Multinational Brigade East. It was the first time the UN invoked “humanitarian” reasons to legitimize aggression and occupation by imperialist forces. Camp Bondsteel is reportedly being used as a secret detention center, with one European Council observer describing it as “a small version of Guantanamo”. 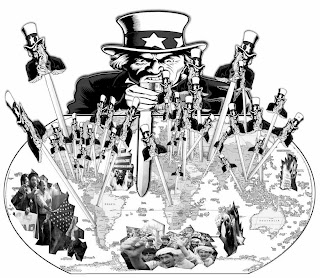 Like Kosovo, Sudan is another country coveted by US imperialism, being rich in still untapped oil, copper and other natural resources, where the entry of a UN peacekeeping mission served US imperialist interest rather than that of the Sudanese. The US had instigated and taken advantage of ethnic differences as one way of destabilizing the Sudanese government and preventing Sudan’s extraction of its natural resources with the help of China. The US brokered the Darfur Peace Agreement between the Sudanese government and the rebels it has backed, with provisions for the presence of US troops under a UN peacekeeping force. 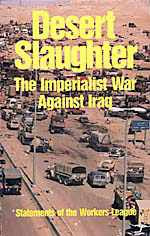 The UN again sat idly by while the US and its “coalition of the willing” allies invaded and occupied Afghanistan and then Iraq on false claims of countering terrorism and the proliferation of weapons of mass destruction. When the US found itself saddled with rising costs of occupation and many of its allies withdrew from the coalition, the UN was called upon to set up a “Peacebuilding Commission” to provide a politically acceptable mechanism for overseeing the occupation and sharing the financial burden.

The Peacebuilding Commission, which includes all the permanent members of the Security Council at its core, primarily brings together international donors, and financial institutions, national governments, troop contributing countries; marshals resources and advises on and proposes integrated strategies for post-conflict peacebuilding and recovery. A Peacebuilding Fund was also provided for in the UN resolutions establishing the Peace Commission.

The most recent and most blatant example so far of how the UN is being used to legitimize and deodorize naked imperialist aggression under the guise of “humanitarian intervention” is the March 2011 UN Security Council Resolution 1973 (2011) ordering a “No-Fly-Zone over Libya” and air strikes against Muammar Gaddafi “to ensure the protection of civilians”. Thinking that a few bombings for a few days would bring about the downfall of Gaddafi, the US and its NATO allies were at first careful to point out that the intervention precludes hitting non-military targets, deploying ground forces or arming the so-called Libyan rebels.

But as the months wore on and there were no direct hits to finish off Gaddafi and topple his regime, the targets became more visibly non-military, and the presence of foreign ground troops and the arming of the rebels became an open secret. The bombings have been extremely barbaric and resulted in a full blown invasion, tens of thousands of civilian casualties (at least 50,000 according to the NATO rebels themselves) and untold destruction of social infrastructure and civilian structures. No end is in sight for the violence unleashed and further generated by the UN and NATO. 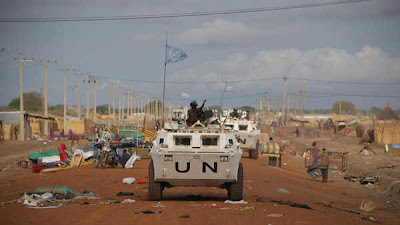 By acts of commission and omission, the UN has been wantonly violating the provisions in its own Charter upholding the norms of international law especially on respecting national sovereignty and defining the parameters for the use of armed force. In September 2008, UN Secretary General Ban Ki -Moon and NATO Secretary General Jaap de Hoop Scheffer signed a declaration of cooperation which reportedly included cooperation in “maintaining international security on the basis of the UN Charter and certain international directives”. But the text of the declaration has been kept secret even to Security Council members, eliciting suspicion as to its contents. 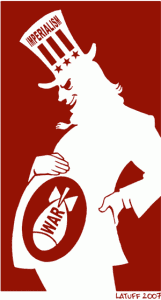 It is not surprising that the UN hardly enforces resolutions, such as those passed by the General Assembly, that are not attuned to imperialist interests, while those that serve imperialist interests are the ones that are enforced. It is in the General Assembly where issues are discussed openly and voted upon democratically, each member countries being represented and having equally one vote. But it has no implementing power and thus its resolutions have only the power of moral suasion, no matter that these are democratically arrived at.

The real power to decide and implement lies in the Security Council, which has only fifteen members, ten of whom are temporary and on rotation basis. The remaining five permanent members, all victors in the Second World War, each has a veto power over the fourteen others. Additionally, the US is undisputedly “the first among equals”, being the biggest donor contributing up to 22 percent of the UNO’s finances aside from having the mightiest military machine.

The pretense at maintaining global peace and security is as deceitful as the related myth of promoting development and progress. The UN plays lip service to the need for global and economic justice especially for the third world countries, if there is to be an enduring peace. But its programs and policies, such as the Millennium Development Goals, are designed to serve the corporate agenda of imperialist globalization instead of instituting structural and policy reforms such as national industrialization, the cancellation of onerous debts and the reversal of WTO trade regimes and neoliberal reforms imposed by the IMF-WB. The perpetuation of these policies daily inflict the slow but severe violence through poverty and social injustice that afflicts the majority of peoples all over the world. 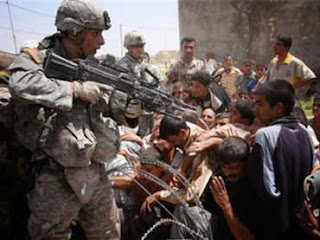 It is thus totally pathetic and disgusting for the UN to continue the pretense at being the champions of world peace. Its calls for an international day of peace, ceasefire and non-violence ring hollow amid the cacophony of injustice, murder and genocide that it has been a willing party to. The UN, especially its Security Council and the office of the Secretary General, has been a tool of the US and its imperialist allies and reactionary puppets for waging wars of aggression against sovereign states as well as for armed counterrevolution against the people and their revolutionary forces.

The ILPS calls on all its member organizations and allies to totally expose and oppose the UN for being a front and tool of imperialist plunder and war, not an international agency for promoting peace and development. Only the solidarity of the people and all those who resist and struggle against imperialism can pave the way to a world with genuine peace and development.###

"In 1960-61, a UN peace-enforcement contingent was sent to the Congo where its first Prime Minister, Patrice Lumumba, faced a US- and Belgian-backed rebellion in the Congolese province of Katanga. Lumumba appealed for UN and even US intervention, but the UN refused while the US continued to support the rebellion. US official documents declassified years later reveal that then US President Eisenhower ordered the CIA to “eliminate” Lumumba, after several attempts to poison him failed. The Katanga rebels eventually captured Lumumba with the help of CIA and Belgian police officers. Lumumba again appealed to the UN to intervene, but all the UN Secretary General Dag Hammarksjold did was to lamely appeal to the Katangans to treat Lumumba according to the due process of law."