I WISH to salute the Morong 43 health workers for their perseverance in fighting for their rights and for a just cause. I congratulate them for their successful struggle and release. I am confident that their unjust imprisonment has strengthened their resolve to serve the exploited and impoverished people and render health services to them. I wish them still greater success in their noble endeavor.

I appreciate the lawyers and human rights activists who ably and steadfastly defended them and the millions of people and all the organizations and personages in the Philippines and abroad who clamored for the release of the Morong 43. I congratulate all of them, including the Deputy Speaker Lorenzo Tanada III and the senior statesman former Senator Wigberto Tanada, who visited the NDFP Negotiating Panel sometime ago and pledged to work for the release of the Morong 43 and all political prisoners.

I wish to express appreciation to GRP President Benigno Aquino III for his order to withdraw the false charges against the Morong 43 health workers, thus paving the way for their release. He heeded the longrunning public clamor for their release and adhered to his own expressed conviction that any fruit of the poisoned tree cannot be tolerated in the case of the Morong 43. 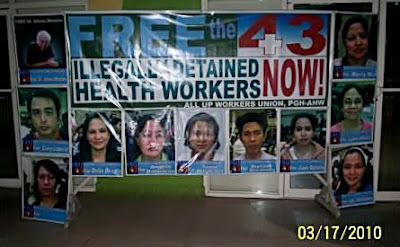 The prospects are looking bright for the forthcoming preliminary talks between representatives of the GRP and NDFP negotiating panels from January 14 to 18, 2011 in view of the GRP's show of respect for the safety and immunity guarantees for NDFP negotiating panel chairperson Luis Jalandoni during his current Manila visit, the current ceasefire between the armed forces of the GRP and NDFP and the release of Morong 43.


The preliminary talks are meant to pave the way for the resumption of the formal talks in the GRP-NDFP peace negotiating on February 15 to 21, 2011 by setting the agenda, ensuring further compliance with the Joint Agreement on Safety and Immunity Guarantees, and other existing agreements and agreeing on goodwill and confidence-building measures, including the long-expected release of political prisoners.


Sison, Jose Maria. SALUTE TO MORONG 43 AND APPRECIATION TO ALL CONCERNED AND OPTIMISM FOR THE GRP-NDF PEACE NEGOTIATIONS. http://www.josemariasison.org/?p=5667