by Ina Alleco
Repost of "The Lies about Jose Maria Sison"


FORMER press secretary of the Fidel Ramos government and Inquirer columnist Rigoberto Tiglao came out with a review of the Mario Miclat’s “Secrets of the Eighteen Mansions: A Novel” (Manila: Anvil Publishing, 2010), a book which attacks the Communist Party of the Philippines, its members, and what they have struggled for all these years.

The same day, a separate review came out wherein the lies peddled in the Miclat book were exposed and the book author’s own self-serving motives for coming out with such a memoir of twisted recollections were laid bare.

Now I don’t know who Mario Miclat is apart from what I’ve read about him in both Tiglao’s column and the book review; but I will admit that I know Jose Ma. Sison (whom Miclat attacks and vilifies in his book) and what he has done for the national democratic movement and the struggle for genuine freedom and democracy in the Philippines. This personal knowledge of who Jose Ma. Sison and all that he has fought for and continues to fight for is what immediately caused me a measure of annoyance and even anger after reading Tiglao’s column. 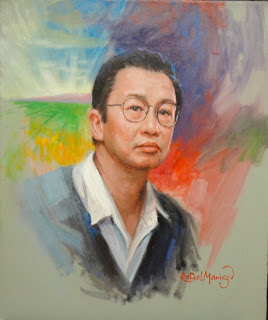 Attacks against JMS are nothing new, and the man is used to it, I suppose. I bet he even laughs whenever reading anything that slanders him and paints him in the most unlikeable colors. But even if JMS himself shrugs off this sort of thing, people who believe in him, who are grateful for all that he has done in service of the cause of national liberation in the Philippines, people like me, well, the attacks feel like they’re also leveled against me to some degree. They feel quite personal.

Why? Because JMS is a revolutionary I look up to; and his life in the struggle for freedom is one I find greatly worthy of emulating.

Here’s a man who has devoted all his intelligence, strength and will to the cause of the poor and working people. From his youth he has given all that he had to create a movement strong enough to fight and bring down a dictatorship (and continue to expose and oppose the anti-people governments that succeeded the Marcos regime), and he was imprisoned for 10 years because of it.

After he gained his freedom, he did not retire to a life of comfort and instead continued to write and speak about the conditions of miserable poverty and oppression the Filipino people continued to face. His refusal to be silent is what led to the cancellation of his passport: the Aquino government maliciously revoked the validity of his passport when he was out of the country in 1988 and forced him to go into exile.

Here’s a man who continues to be persecuted for being a freedom fighter and is denied the right to be given asylum in a foreign country, while at the same time he cannot go home to his own country because he will most assuredly be assassinated the moment he steps on the tarmac.

Here’s a man who continues to be maligned and slandered for supposedly living the lavish life in the Netherlands when in truth he and comrade-wife Juliet de Lima maintain the most frugal of lifestyles — so simple and humble that it can hardly even be called to possess ‘style.’ After being included in the US and European Union’s terrorist list, he has also been denied the right to travel outside the Netherlands and forbidden from finding any means of livelihood. Every week he has to report to the local police station and prove that he has neither gone into hiding nor left the country.

It’s most infuriating how the propaganda agents of the enemies of the Filipino people harp on how JMS supposedly lives like a king in the Netherlands. The man rides public transport — the bus or the train — or relies on the few comrades with decidedly luxurious and uncompromisingly functional cars to take him to appointments. 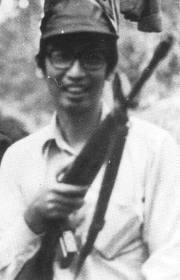 He reads and writes for work and for leisure, and he spends hours on interviews or lectures about the international economic and political situation or the prospects of the Philippines for true progress and related issues. He meets with students and journalists, employees and housewives, diplomats and laborers. Anyone who has an interest in matters of national and international liberation, freedom and democracy will always find it easy to begin a conversation with Jose Ma. Sison.

As for his supposed penchant for the high life, the only gatherings he goes to are the ones where he is invited and where he doesn’t need to spend a euro: get-togethers sponsored by Filipino migrant groups; despidadas or welcome parties for friends, the occasional home-cooked dinner after meetings, or when there are visiting dignitaries and they seek to consult or speak with him.

It’s even uncertain if he has a MuseumKaart and has visited a tenth of the museums in Utrecht or nearby Amsterdam: the cards cost 40 euro and with it one can visit various museums all over the Netherlands for free. He and wife Julie survive on 800 euro a month — the subsidy grudgingly provided by the Dutch government. From this meager amount they have to pay utilities and rent, and everything that remains goes to food.

Those who have never been to the Netherlands think that life here (or anywhere else in Europe) is easy. In many ways, from the simple reasons to the more important ones, it is.

Yes it’s easier here because the air and the environment are much cleaner than in the Philippines. There are public parks where one can jog or stroll with one’s children or play basketball. There’s hardly any pollution because there are trees everywhere so breathing does not entail risks. Traffic jams are almost unheard off because the cities are well planned and road rules are strictly enforced and mostly obeyed. The government despite its corruption at least uses much of taxpayers’ money to provide and maintain social services that are more or less accessible to the general public: garbage is regularly and efficiently collected and disposed off; there are public clinics for babies and children up to to 18 years old; and health insurance is mandatory for everyone.

But Jose Ma. Sison did not come to the Netherlands on his own volition; he didn’t stay here because he was trying to escape the chaos in his own country.

He went to the Netherlands on a speaking tour on the invitation of solidarity groups and it was then that his passport was cancelled and he was rendered suddenly homeless. He remains in the Netherlands because he is compelled to by circumstances and because he is bound by the collective decision of his comrades and allies who are correct is ascertaining that he is much more useful alive here in this cold and faraway country than dead in the one he loves and was forced to leave.

No doubt if left on his own and allowed to make his own decisions without regard for the threats to his own life, he would’ve taken the first KLM flight to the Philippines. No doubt if he were home in the Philippines he would be at the thick of all activities of the national democratic movement, at the frontline of protests demanding respect for civil, political and human rights.

Those who attack Jose Ma. Sison resort to slandering him because they continue to fail in their efforts to discredit and prove wrong everything about the Movement that he helped build and continue to give guidance and inspiration to through his books and speeches and other writings. He has written books that set to rights the falsities of history as it was previously written about the Philippines, and removes the blinders that keep Filipinos unaware of how their nation has been raped and continue to be raped.

His body of written work provide a veritable map or manual to how the Filipino people can destroy the shackles that bind them to poverty and begin to build a government and a nation that puts a premium not on profit but on the sanctity of human life above everything else. His analysis of global developments also prove valuable contributions to the international struggle against imperialism: an internationalist to the core, he is always able and willing to give support to the campaigns of the working people of other sovereign countries in defending themselves against all forms of imperialist aggression. 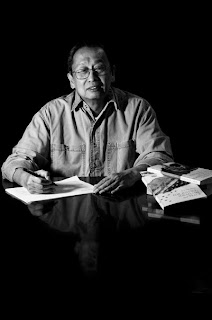 They do their best to expose Jose Ma. Sison as a man with personal weaknesses and who has committed mistakes as a leader, husband, father, friend or brother; but they say nothing about what he has done to atone for whatever mistakes he has made and how he has more than evolved into a finer specimen of humanity and compassion through the years because of the support and love of his wife and children, friends and family. He was included in the terrorist list and on the hit list of the US and its agents in the Philippines because he remains committed to the cause that embraces all that seeks betterment and good for the oppressed;and because the Movement he helped build and lead continues to gain strength.

In the meantime, he has never lost what kept him sane through 10 years of imprisonment and through agonizing hours and days and weeks of torture in its various forms: a sense of humor that is both keen and giving; and a lightness of heart even as his will remained built of steel.

Those who attack Jose Ma. Sison make much of how he is able to laugh and sing and dance even as he speaks of revolution. They say he shouldn’t even smile because his comrades in the Philippines live in dire poverty and want.

This says much about how those who are against the revolution: they believe that only the oppressors and exploiters have the right to laugh and sing and dance; after all, they find delight in the death and suffering they cause among the poor and exploited just so they could live in castles and bathe in champagne if it was their whim.