Contribution to Literary Interrelations: Conference in Celebration of the Centennial of the UP Department of English and Comparative Literature, May 28, 2011
By Prof. Jose Maria Sison
Bachelor of Arts, Major In English (Creative Writing and Journalism), 1959

First of all, let me thank the UP Department of English and Comparative Literature (DECL) for inviting me to participate in this conference titled Literary Interrelations. I feel highly privileged as I am aware that this conference is a major activity in the celebration of the centennial of the department and is in honor of the late UP President Salvador P. Lopez on his centenary and in celebration of the 81st anniversary of his work, Literature and Society.


Literature and Politics in General

1. To be serious and significant, literature draws content from the economic, political and cultural aspects of society and processes such content to present a concise and concentrated expression of social life through the contexting and interactions of a cast of fictional characters. All great and major works of literature in ancient and modern times are similar in this regard. The great epics of ancient times contained a great amount of knowledge. So have the great novels of modern times.

2. Even in slave-owning and feudal times, when they had no sustained theory of classes and class struggle to go by, the creative writers observed and studied the mode of production in the concrete and learned how the various groups of people were differentiated by property ownership, the need to work and the unequal distribution of the social product. They had to know how society ran even if their works seldom focused on the antagonism between the exploiting and exploited class.

3. Ancient literature was always linked to politics. The creative writers were obeisant to the rulers, to the entire ruling political system and to the God or gods that had supposedly pre-ordained them. But the literary masterpieces of ancient times have the most lasting value when the theme is the struggle for freedom and justice against the tyranny and oppression by rulers who usurp authority or who lose their mandate from heaven or by invaders who have an overreaching political and economic interest and different system of religious belief.

4. Literature resides in the cultural sphere of society and has a vantage point over the political and economic aspects of society. It derives certain benefits from being in the same neighborhood as the other components of culture. On top of his observation of daily life or any focused social investigation, the creative writer can gain erudition and profundity by the reading and study of philosophy, sacred theology, mythology, earlier works of literature, the natural and social sciences, law and so on.

5. The theory of classes and class struggle were first put forward by French revolutionary democrats during the French revolution. It spread fast and motivated the rise of the social-conscious novels in the 19th century in Europe. These were sharply critical of the exploitative conditions of bourgeois society, the proletarianization of the peasantry, the long and harsh working hours and the conspicuous poverty of working class families in the urban areas. Rizal was definitely influenced by some 19th century European novels..

6. Marx adopted the theory of classes and class struggle and extended it to the theory of the class dictatorship of the proletariat. Related to this was the development of materialist dialectics in philosophy, the critique of the capitalist political economy and the theory of scientific socialism. Eventually, literature guided by Marxism would emerge vigorously under the banner of social realism. This would flourish in the Soviet Union and elsewhere.

7. A further major development in the theory of literature and art in the 20th century would be Mao’ Talks at the Yenan Forum on Literature and Art. This has widespread influence among the creative writers of the new democratic revolution in the Philippines. Mao answers a series of questions. For whom is literature? How related is it to the classes and class struggle in society? Who are the heroes? Should we not learn from the masses first? What is the relationship of popularization and aesthetic standards?


Literature and Revolutionary Politics in the Philippines 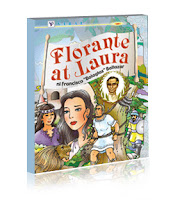 1. The prototype of patriotic Filipino literature was provided by Francisco Balagtas’ Florante at Laura, written in 1838. It is a long poem in the main about the romantic relationship of the Christian lovers Florante and Laura being oppressed in Albania and about the Muslim lovers Aladdin and Flerida from Persia. Florante was tied to a tree in the forest and was about to be devoured by lions when Aladdin rescued him. The utterances of Florante against social and political conditions and against the tyrant tormenting him and coveting Laura may be intepreted as directed against the rulers in the Philippines. The story ends like a comedia with the Mustlim lovers converting to Christianity.

2. The novels Noli Me Tangere and El Filibusterismo of Dr. Jose Rizal may be considered the great literature of the old democratic revolution. They were the best and long lasting literary contributions of Rizal to the Philippine revolution, despite his refusal to join the leadership of that revolution. The Noli gives us a penetrating criticism of the Spanish colonial system, especially the domineering friars and their pliant indio collaborators like Capitan Tiago, and explores reforms as advocated by Crisostomo Ibarra who is ultimately frustrated. In the Fili, he becomes Simoun the jeweler who takes the stance of the anarchist, keynotes the denunciation of the entire colonial system and seeks to overthrow it but fails.. The poems of Rizal (La Ultima Adios) and Andres Bonifacio (Pag-ibig sa Tinubuang Lupa) and many other patriots are gems of patriotism and revolutionary politics. 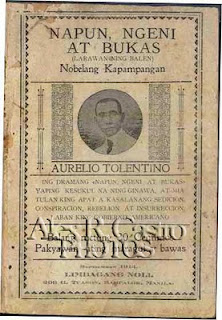 3. The best known theatrical play against US imperialism in its firs decade of dominating the Philippines was Kahapon, Ngayon at Bukas (Larawan ng Inang Bayan) written by Aurelio Tolentino in 1903. It unfolds the triumph of Inang Bayan over her tormentors, Haring Bata (China), Halimaw (the Spanish friars who continued to control the church and influence local politics), Dilat na Bulag (Spain) and Bagong Sibol (US the new colonial power). The main scene is the liberation of Taga-Ilog or Juan de la Cruz who at the beginning of the play is shackled and in prison. In this scene, he throws the American flag to the ground and tramples upon it until it is torn and he breaks the shackles and opens the jail, while all characters of the play shout, “Long live freedom! Long live the Motherland!”

4. The novel Banaag at Sikat written by Lope K. Santos in 1906 let its characters talk explicitly about the great divide between the rich and the poor, the work of the associations of workers, capitalism and socialism. It tells of the story of Delfin in love with daughter of a landlord. Delfin is a socialist who wishes to spread the principles of socialism among the people and believes in change through peaceful means. His friend Felipe is an anarchist who believes in the violent overthrow of the rulers and the end of the cruelty of the landlords. Lope K, Santos has a naïve understanding of socialism and appears not to have studied scientific socialism. He also glosses over the issue of national independence. The conflicts among characters in the novel do not manifest class struggle but merely the cruel and exploitative behavior of rich persons towards certain individuals within their ambit. 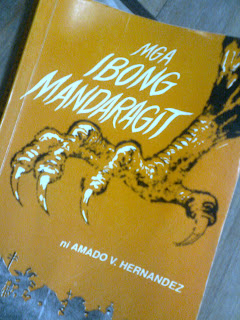 6. The novels and poetic works of Amado V. Hernandez are definitely literature of the new democratic revolution. They include Mga Ibong Mandaragit (1969) and Luha ng Buwaya (1972) and his collection of poetry, Isang Dipang Langit. The works of Hernandez are based on his experiences as a resistance fighter, as a labor leader and as a political detainee. His socio-political novels and poems expose and denounce the exploitative and oppressive conditions of the ruling system, point to the need for revolution by the working class and the people and actually call for revolutionary change. The works of Hernandez and Mao’s Talks at the Yenan Forum inspired the young creative writers in the 1960s to write in the service of the people and the new democratic revolution.

7. Since the 1960s, a great deal of creative writing has been done along the line of the new democratic revolution, in the countryside, in the urban underground and even quite openly. This includes novels,short stories, plays and poems. The quantity and quality of the output are high and are already more formidable than the output of those creative writers in the short-lived old democratic revolution. But the output of the revolutionary creative writers is still small relative to the abundant material offered by more than 50 years of the people’s legal mass movement and more than 40 years of armed revolution. I leave to others interested in literary history and literary criticism to keep on surveying the literary field and appraising the literary output of the revolutionary writers.

8. I am confident that the revolutionary creative writers will keep on surpassing themselves
and producing more literary works of higher quality, because the revolutionary practice keeps on expanding as possible material for creating the literature of the new democratic revolution.