From the very beginning I knew it would take a miracle for me to win. I was ecstatic enough that I had the courage, the strength (I’m 62), and the opportunity to run for the Senate. I thought that the long- suffering and complaining Filipinos could perform a miracle. I believe in the Filipinos and in their capacity for greatness. 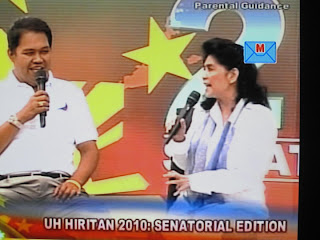 The miracle of a victory did not happen. Something else happened. A black magic against the Filipinos was performed. But the Lord would not allow it to take place without a little miracle in our favor- in the form of a concrete evidence of vote- shaving and vote- regrowing. It is a PCOS “ Voodoo” or PCOS “Shave & Regrow”.

I went to Congress to share this story at the House Committee on Suffrage and Electoral Reform but I had some eerie feeling this story will just be buried among the countless stories of Filipino grievances.
I waited patiently for my chance to ask questions and clarifications from the Smartmatic representatives . When I presented my case, no Smartmatic representative was present. A  week before my schedule to question them, the Congress investigation was unceremoniously terminated.

I am from Nasugbu, Batangas, residing in Quezon City. I ran for the Senate under Ang Kapatiran Party. The Nasugbu canvass of votes came out 2:35:55 a.m. of May 11. This is evidenced by the certified true copy of the Certificate of Canvass (COC) for Nasugbu. The Nasugbu canvass appearing at the ibanangayon.ph shows the correct results as follows:
Nasugbu               Batangas
Canvass                Canvass

Ibangayon.ph is the website showing also the partial results like those from the cluster precinct. As of May 11, ibanangayon.ph was already showing the completed canvass of Nasugbu votes. As of 3:00 p.m. of May 12, the COMELEC National Canvass (election results.comelec.gov.ph) for the whole of Batangas was showing the shaved results ( appearing above opposite the Nasugbu figures for your easy configuration.

The votes of all AKP candidates were shaved; worst of all was mine—from 11,894 to a measly 47 votes. These computerized cheating by shaving or “bawas” was there for all to see at the websites : ibanangayon. ph and for the COMELEC national canvass at: electionresults.comelec.gov.ph. Both websites showing varying results were available until the afternoon of May 12, 2010 as evidenced by affidavits executed by AKP volunteer Administrative Staffs Jackie Losala and Joyce Solatre. AKP has it in soft copy.

When Ang Kapatiran saw the shaved Nasugbu results, our Presidential candidate JC de los Reyes withdrew his previous act conceding defeat. This withdrawal was prompted by the Nasugbu vote shaving –among the other election irregularities which were starting to surface.

The retraction by JC de los Reyes was all over the radio and television stations. Within a short period of time, Jackie Losala reported that the Comelec website could not be accessed. When it reappeared, electionresults.comelec.gov.ph has restored my missing votes—like magic; with the flick of a switch or a sleight of hand.

The local municipal canvass such as that of Nasugbu is forwarded to the provincial canvasser such as Batangas only after the total votes had been canvassed in the municipal level. Batangas then forwards the consolidated provincial canvass to the National COMELEC Canvassing center at the PICC which is supposed to reflect my total Nasugbu results of 11, 894 votes. But up to May 12, at about 3:00pm it was reflecting only 47 votes out of 11, 894. It remained that way for almost 2 days from the date and time of the completion of the Nasugbu Municipal Canvass. The shaved figures however were magically rectified after the fraud has been discovered by the AKP staffs and after JC de los Reyes already withdrew his act of conceding defeat--with the Nasugbu shaving as one of his reasons.

1. Why were there two varying sets of figures representing the canvassed Nasugbu AKP votes when these numbers were supposed to have been sent by one and the same counting machine (PCOS)? There must be two or more PCOS handling the same votes but performing different functions such as diverting, adding, shaving, etc. Or the Nasugbu Municipal votes were simply shaved while being transmitted to the Batangas Provincial canvasser.

2. How was the shaved figures rectified after the discovery of the shaving and the publicized retraction by JC de los Reyes to make them conform to the correct number of votes appearing at the Nasugbu COC (Certificate of Canvass)? This rectification/regrowing shows that with the flick of a switch or a sleight of hand of those manning the PCOS the canvassed votes can be subjected to subtraction, addition, multiplication; may be made to disappear into the cyberspace, even dance Cha-cha and/or follow any other action at the whim of the operator.

3. During the almost two days when the AKP votes were missing in the COMELEC canvass, where were they being kept or stored? Are they waiting for the highest bidder or have been diverted already in favor of other candidates? When the correct figures of AKP votes were restored were these numbers taken back from the candidates in whose favor they were credited or did the PCOS manufacture the missing number of votes? This must be one explanation for the avalanche of excessive number of votes in favor of the winning candidates right after the closing of the poles.

Coming out with this expose can pit me against heartless machines operated by men and women with devious schemes. But I trust in the Filipinos’ basic sense of righteousness. With this faith in you I believe that you will help me get to the bottom of what may be called Precinct Count Optical Scam ( PCOS 2010). Or at the very least, you have given me a chance to present to you my case. And for this I thank you.

May God bless us all and light our road.