Why am I being hounded by the Ombudsman?

From February 2005 to May 2010, I was Vice President for Public Affairs of the University of the Philippines System, serving under UP President Emerlinda R. Roman. Under me were the Information Office, the Office of Alumni Relations of the UP System, and the Gurong Pahinungod. 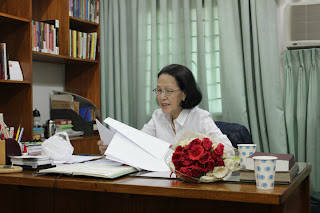 Because UP was preparing for the celebrations of its Centennial in 2008, our work load—heavy at best—became considerably heavier. A slew of other tasks was added to the regular responsibilities of running three newspapers, maintaining the UP System website, producing regular magazine-sized reports, writing and sending out regular media announcements, providing support for the Office of the President during the annual presentation of the UP Budget to Congress and the campaign in Congress for the approval of the new UP Charter, and providing communications support for the offices of the other Vice Presidents.

Among these additional responsibilities were President Roman’s alumni caravan, which took us around the country to involve UP alumni in the celebration and in the fund-raising campaign; and several special projects—a coffee table book, another book called Kwentong Peyups, a short documentary film, a UP history book project, supplements for the print media, and several Centennial contests (for the Centennial logo, the Centennial literary award, the Centennial song, the Centennial short film, etc.). My Assistant VPs and I worked long hours, including weekends, and out-of-town trips.

Throughout this period, I continued to teach graduate courses--sometimes one, sometimes two, each semester.

On one such weekend in June 2006, Lydia Arcellana (AVP and Director of the Office of Alumni Relations) and I had a lunch meeting with a group of UP alumni at the Dulcinea, a restaurant on Tomas Morato.

On September 14, 2006, UP received a Subpoena from the “Task Force O-Plan Red Plate” of the Office of the Ombudsman, directing it to submit my driver’s Trip Tickets “and all other appurtenant and relative documents authorizing the use of government vehicle with plate no. SET-536 (the car assigned to my office) for the period June 13-28, 2006.” It contained the ominous threat that failure to do so within 3 days of receipt would “merit the filing of criminal charges” as well as administrative charges. The document, signed by Atty. MARK E. JALANDONI, Assistant Ombudsman, “issued by authority of the Honorable Ma. Merceditas Gutierrez, Tanodbayan,” did not state what these “charges” were.

Atty. Marvic Leonen, then UP Vice President for Legal Affairs, assured me there was nothing to worry about. The car might just have been seen outside the UP campus. He would submit the required trip tickets and a letter with a detailed explanation of the nature of my job. This was in September 2006.

Since we did not hear from the Ombudsman again, we assumed the documents were satisfactory. We were wrong.

In May of this year, I officially retired as full-time UP Professor and VP for Public Affairs. On July 12, 2010 (four years after the initial communication), UP received an “Order” from MEDWIN S DIZON, Acting Director, PIAB-A.

Atty. Marvic Leonen had left his post to become Dean of the UP College of Law. So it was Atty. Theodore Te who replaced him as VP for Legal Affairs who helped me plough through the legal jargon to determine what the problem was.

The Ombudsman was claiming that on June 25, 2006, a Sunday, the car assigned to me had been seen in front of Tonton Thai Massage on Tomas Morato Street at 3:30 PM.

The strange thing is that the accompanying photos (the evidence, I assume) showed the car to be parked in front of—not the massage establishment named—but the restaurant Dulcinea with the sign above its entrance prominently shown. And the affidavits of the people who allegedly saw the car and took the photographs—a certain Peter John R. Arellano and a certain Rholie C. Besoña, “Associate Graft Investigation Officers”—did not claim that they had gone inside Tonton Massage to see whether I was indeed there, or that they tried to find the driver and examine his trip ticket. They even got the time wrong. As indicated in the trip ticket earlier submitted, we had left Dulcinea at 1:30 PM.

On the basis of this, my driver and I were being investigated for graft, and for “dishonesty, grave misconduct, and conduct prejudicial to the best interest of the service.” Mr. Jacinto claimed that we had “caused undue injury to the government, consisting in (sic) the unnecessary consumption of fuel and undue wear and tear of the vehicle.” He added that this was “flagrant wastage of government funds,” and “showed utter disregard on (sic) the policy that public officers and employees should uphold public interest over and above personal interest.”

Does not working on weekends to raise funds for UP qualify as “upholding public interest over and above personal interest”? Apparently not. For the Ombudsman it might even be a crime.

After we had filed our counter-affidavits, we received yet another “Order” dated August 9, signed by the same Mr. Dizon, concerning the “administrative case” against us. We have complied with more affidavits containing basically the same facts.

I am an elderly academic, with an impeccable record of more than 20 years of public service, and numerous awards, for both my teaching and my writing. The latest is the title Professor Emeritus, surely one of the highest honors UP can confer on one of its own. I cannot understand why the Ombudsman seems determined to believe that I (and my Assistant Vice President and my driver) are lying about our whereabouts on that fateful Sunday, particularly since their own evidence shows my car to be parked in front of the restaurant where we said we were, and their own investigators did not bother to enter the restaurant to confirm this.

I feel most aggrieved. Given the countless cases of blatant graft and corruption, involving billions of pesos, which seem to be resolutely ignored, why am I being singled out for this harassment by the Office of the Ombudsman?