by Benjamin F. Cardinez
FILIPINOS are a funny people. Many like to make self-deprecating jokes that may not seem funny to the rest of the world but a cause of belly-laugh to them. They embellish their conversations with non-sensical  terms such as jejemon, jejeje, palpak, emo, bongang-bonga, promdi, jolog and others which they find entertaining. The huge success of television shows called Eat Bulaga  and Wowowee (whatever the heck they mean) is a testament to pinoys'  very simple wit and humor. 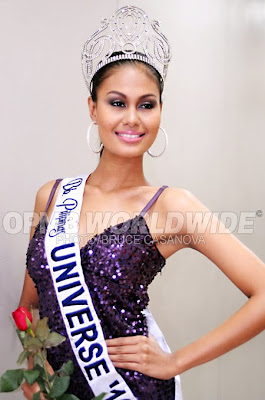 Very recently, an exquisitely beautiful young Filipina from Bicolandia competed in the globally-popular Miss Universe Pageant in Las Vegas, Nevada, U.S.A.  Maria Venus Raj, 22, did very well in the swimsuit and evening gown competitions, making her a strong candidate for the coveted title.  In the Q&A portion of the contest, Venus was asked by Hollywood actor William Baldwin: "What is the biggest mistake you have done in your life and what did you do to correct it?" Apparently nervous but not terrified, Venus stoically confronted the question with a poise fit for a real queen and answered " In my twenty two years of existence, I have not committed any major, major mistake because my family is always there to guide and take care of me".

While many, including the eventual winner, Miss Mexico,  concede that the question was the most difficult one among those that were asked of the five finalists, not a few of Ms. Raj countrymen/women around the globe concluded that her answer was a "mistake" and had cost her the crown. In particular, they deride her for using "major, major" in describing the kind of mistake that was the object of the question, i.e., "biggest".  Some even suggest that Venus could not express well in English and should have used an interpreter. They insist that "major, major" is an incorrect description and is now being made into a derisive joke by some.

The truth of the matter is that "major, major" is not ungrammatical and is a correct hyperbolic synonym of "biggest". Venus explained in an interview that she used it for emphasis - to distinguish minor pecaddilos that were not called for in the question. She maintains that her answer was sincere and straight from the heart and would not think of changing it if she had to do it over again. In the first place, I don't see anything wrong with her answer that she had not commited  a serious mistake. At 22, she is just starting out in life as an adult. She is a small-town girl, welll protected by her loving parents and extended family.  She had never been in the U.S.A. where mores' are different from what she's familiar with; where it's not unheard of that teen-age girls have already committed "big(est)" mistake in their young lives, be it drug use, pre-marital sex, alcohol or whatnot. If the answer she gave the judges was true, how could it be a mistake? Must she compromise the truth just to win a pageant no matter how big it is?

It is so amusing that Ms. Raj's ardent detractors would take offense from a line in an american comedy show, "Desperate Housewives" (in obvious reference to fake medical diplomas in the philippines) but would snicker approvingly when a writer of  the ultra-liberal Huffington Post criticizes  Ms Raj's response, implying lack of intelligence on her part.