In Support of the Ongoing Occupation of Wall Street

IT IS RIGHT TO REBEL

The International League of Peoples Struggle, representing hundreds of organizations in 43 countries, stands with the young workers, students and unemployed occupying Wall Street and city centers around the United States. You are fighting a battle that needs to be fought. You have a right to march and protest without fear of arrest or brutality.


MASS ACTION IS THE ONLY WAY FORWARD

You are right to take to the streets in mass action rather than waiting for change from overpaid Republican and Democratic politicians who are on corporate payrolls. You are right to follow the militant path taken by people from Egypt and Tunisia to Greece and Spain, from Britain to Chile to Wisconsin. From Social Security and the 8-hour day in the 1930s to civil rights laws in the 1960s, mass action is the only way people in this country have won any rights from the corporate ruling class.You are right to take the battle to the doorsteps of that class, the unelected tyrants who own the top 500 banks and corporations. Every day, at electronic speed, they send trillions of dollars around the world in financial transactions while millions cannot find work or afford health care. Their decisions shutter factories, destroy jobs, throw people out of their homes and wreck the economies of communities and entire nations.

WALL STREET IS THE ENEMY OF ALL HUMANITY

These bankers and billionaires also rake in super-profits from murderous imperialist wars against people in Iraq, Afghanistan, Libya, Palestine and elsewhere. In the U.S., they have created a monstrous police state-prison-industrial complex to lock up mostly youth of color, the children of generations of workers, whom they now deny the right to a job. 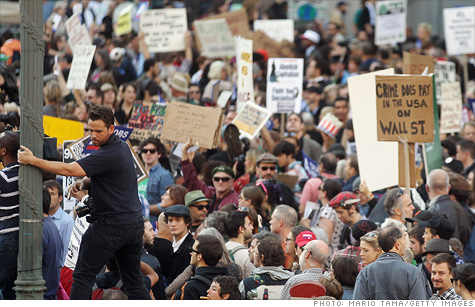 New York City Mayor Bloomberg, one of the richest men on earth, lies when he says that banks create jobs. His banker pals at JPMorgan Chase and Citibank have destroyed 7 million jobs since 2008. This billionaire parasite is closing schools, bus lines, clinics and libraries while increasing his personal fortune by billions of dollars since he took office.


WHERE DID THE BANKERS GET THEIR BILLIONS?

They stole them! And not just the bailout money they were given by both the Bush and Obama administrations. The fortunes of the top 1 percent are the unpaid labor of generations of workers not just in the United States but all over the world. It was created in farms and factories, mills  and building sites, mines and offices from the Nile Delta to the Mississippi Delta, from South Africa to South Korea to South Carolina, from Mindanao to Mexico to Michigan. Many of the biggest fortunes in the U.S were founded on the slave trade. This wealth belongs to all humanity.


IMPERIALISM IS THE SOURCE OF THEIR POWER

It is not a matter of making the rich pay their “fair share.” They have no right to even a penny from anyone else’s labor. We must smash their power over our lives. The source of that power is imperialism, the merger of finance and industrial capital that is plundering the entire world. To fight them we must take a clear stand against imperialism and racism and join hands with people all over the globe who are fighting the same enemy.Both the Republican and Democratic parties represent Wall Street, we have to fight for ourselves. As ILPS Chairperson, Prof. Jose Maria Sison, pointed out in his Keynote Address to the 4th International Assembly this past July, "The Democratic and Republican parties in the US compete as do Coca Cola and Pepsi Cola in flagrantly carrying out the policy dictates of the financial oligarchy and the military industrial complex. Both parties agree on raising the US debt ceiling. And to blunt public protests, they promise to bring down the public deficit, with the Democrats wishing to reduce the tax cuts for the corporations and upper class and the Republicans demanding the further reduction of government social spending."Everyone on this planet has the right to a job, food, health care, education, a home and a peaceful life. The wealth is there! We created it! But to take it back, we must deepen our struggle, strengthen our unity and increase our organization and continue to fight! 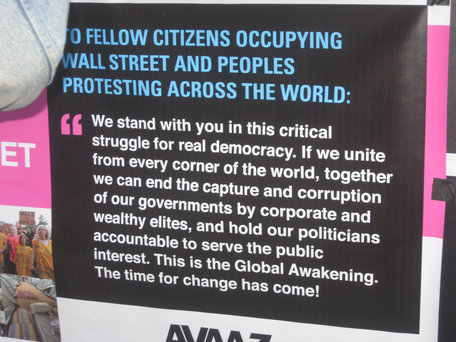 DARE TO STRUGGLE, DARE TO WIN!

The International League of Peoples' Struggle (ILPS) is an anti-imperialist and democratic united front of mass formations at the international, global region and national levels that represents the interests of the workers, peasants, indigenous peoples, youth and students, women, queer and questioning, the homeless, migrants and refugees. It brings together and coordinates the people's organizations according to common multisectoral and sectoral interests and purposes. The ILPS initiates and launches mass campaigns and various types of activities and seeks the cooperation of other anti-imperialist and democratic forces and at the same time, it joins and supports their initiatives. For more information, or link up with us at http://ilps.info/joomsite/