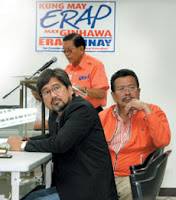 Of all the senatoriables this coming May 10, 2010 elections, my top choice is Atty. JV BAUTISTA.  He is a human rights lawyer and a former party-list congressman  under SANLAKAS, a nationwide multi-sectoral organization established to protect and advance the rights and welfare of the Filipino masses through their involvement in the mass movement. The nationalist and progressive lawyer and former party-list congressman is running under Joseph "Erap" Estrada's Partido ng Masang Pilipino. 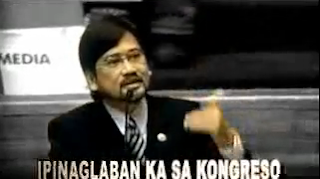 JV Bautista was the first to expose the electoral fraud in Sultan Kudarat during the congressional canvassing session on the 2004 national elections.  Here's his resume of credentials:

Member, House of Representatives
12th Congress, Republic of the Philippines
(2001-2004)

Board of Trustees, Freedom from Debt Coalition
(2008- present )

Commissioner, Integrated Bar of the Philippines
Commission on Bar Discipline (1999-2002)

1992- 1996 Chief Legal Counsel and Board of Trustees
Task Force Detainees of the Philippines, Inc. (TFDP)

Involvement in Socio-Civic and Cause-Oriented Groups:

1997- 1999 Spokesman, 13th House of Delegates
Integrated Bar of the Philippines

* University of the Philippines Diliman '83
* Bachelor of Laws

In a nutshell, JV Bautista is encapsulated in one of his political (internet only?) ads:

JV Bautista has a track record of consistent service to the poor and the nation. While he was part of EDSA 2, his continuing support for Erap for several years now shows he has apologized for that atrocious 2001 "People Power" coup. More information about him can be found at his blog, JV Bautista.
Nationalist. Patriotic. Capable. Pro-Masses. Pro-Erap. Ano pa? Pls. vote Atty. JV BAUTISTA for Senator! Numero 4 sa balota.
Posted by Jesusa Bernardo at 8:20 PM

Fancy the content I have seen so far and I am your regular reader of your blog.

I am very much interested in adding http://blog-by-taga-ilog-news.blogspot.com
in my blog http://felix-googleblog-archive.blogspot.com

I am pleased to see my blog in your blog list.

Hope to see a positive reply.

Thanks for visiting my blog as well !

Waiting for your reply friend !!!!!