This wildlife conservation report is from WWF-for Nature Philippines: 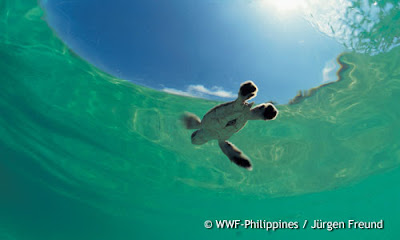 Thousands of endangered marine turtles have been saved over the past year in the region known as the Coral Triangle due to a new program aimed at reducing bycatch in longline tuna fisheries, according to a review released by WWF today.


The program to introduce circle hooks in longline fleets and train fishermen in sea turtle recovery methods has reduced the number of sea turtles caught by up to 80%, translating into thousands of individual turtles saved from almost certain mortality, according to a review of the 2009 program. The new circle hooks are much less likely to be swallowed by turtles than traditional J-shaped hooks, which cause suffocation or internal bleeding when swallowed. Circle hooks are also easier to unhook from a snagged animal.


"We are extremely pleased with the response from fishing companies in the Coral Triangle region, many of which have shown great support for the circle hook and turtle recovery program," said WWF´s Coral Triangle Byctach Strategy Leader Keith Symington.


"This really represents a growing global demand for more sustainably sourced seafood and a growing awareness of the pressures on marine environments."


In Indonesia last year, the bycatch reduction program saw more than 40,000 new circle hooks distributed over the past year, which equips roughly 40 longline vessels for an entire year. This translates into thousands of sea turtles saved from hooking during the fishing season. Additionally, on-board observers and de-hooking programs by WWF in cooperation with the Indonesian Ministry of Marine Affairs released a total of 115 sea turtles captured by tuna longliners back into the sea.


"There were a lot of turtles before, many were hooked. Now there are no turtles coming in, the boats scarcely catch turtles, only one or two. Before we caught at least ten turtles a month," he said. Companies that now have plans to source circle hook caught tuna from the Coral Triangle include global seafood supplier Culimer BV and US seafood company Anova Food. Anova has been working in direct partnership with WWF Indonesia in outfitting vessels with circle hooks and working with local fishermen and processors to ensure a supply of tuna harvested in a more responsible manner.


Bas Zaunbrecher, Southeast Asia Representative for Anova Food said: "We are very pleased to have WWF as our partner in the process towards sustainable fishing, including circle hook and observer program trials with tuna longline vessels in order to minimize by-catch of sea turtles." Culimer Direcetor Martin Brugman said the company was aiming to create a ´critical mass´ of circle hook users.


"Culimer believes that improved seafood quality and extra value to fishers is critically linked to more sustainable fishing practices. That is why we directly support programs for implementing circle hooks and on-board observer programs."


Leaders from the seafood, communications, travel, finance and oil and gas industries will come together with Asia Pacific policy makers next week, in Manila on January 19 and 20, to establish new partnerships between the private sector, policy makers and organisations interested in sustainable business opportunities.


Bolstered by the positive conservation results of its growing partnerships with the seafood industry, WWF will be seeking further commitments from industry leaders to put fisheries on a more sustainable path, including reducing their bycatch. The CoralThe Coral Triangle Business Summit will be hosted by Philippine President Gloria Macapagal ArroyoPresident Gloria Macapagal Arroyo in collaboration with WWF.


Editors note:
The Coral Triangle is the most diverse marine region on the planet, matched in its importance to life on Earth only by the Amazon rainforest and the Congo basin. Defined by marine areas containing more than 500 species of reef-building coral, it covers 5.4 million square kilometres of ocean across six countries in the Indo-Pacific Indonesia, Malaysia, Papua New Guinea, Philippines, Solomon Islands, and TimorLeste.


The Coral Triangle also directly sustains the lives of nearly 130 million people and contains key spawning and nursery grounds for tuna, while healthy reef and coastal systems underpin a growing tourism sector. WWF is working with other NGOs, multilateral agencies and governments around the world to support conservation efforts in the Coral Triangle for the benefit of all.


For information on the Coral Triangle go to: www.panda.org/coraltriangle