On the 9th Year of EDSA 2 Coup: Former Philippine Estrada is Cleared to Run Again

Ultimately, the Comelec ruling allowing defamed and deposed President Joseph Estrada to seek again the presidency is very fair to the Filipino people. According to the decision:

"In the end, it is the Filipino people who would act as the final arbiter on whether they would have Estrada sit again as president...." 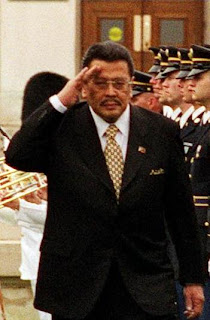 Now, I'm not saying that the Comelec itself is fair (Remember the 2004 Hello Garci).

It just so happens that the ruling itself is fair to the people. Why did Comelec rule in favor of Estrada? To allow Illegitimate 'President' Gloria Arroyo's run for congresswoman in Pampanga less open to legal challenge.

In the end, or near end, the undemocratic, seditious EDSA 2 that deposed Erap came back to slap the faces of the gullibles one more time.

Still, the date of promulgation is so ironic-on the exact day nine years ago. Said Apolinario "Jun" Lozada, a senatoriable under Estrada's PMP party:

"On the same day that he was humbled, the phoenix will rise again,.. Nine years after a powerful few imposed their will on the people, it is time that the will of the poor and the powerless prevail."


Excerpts from The Daily Tribune headline report on the historic Comelec decision:

It's all systems go for former President Joseph "Erap" Estrada's second run for the presidency, a post he first held in 1998 only to be aborted by a coup d'etat instigated by the elite civil society and backed by treacherous military chiefs.

All arguments, rumors and innuendoes that Estrada is banned from running for the presidency again, or that he is withdrawing from the race, came to a stop after the Commission on Elections (Comelec) yesterday junked the three petitions filed last December seeking the disqualification of the former leader and in the process allowed Estrada to run in this year's presidential elections...

"This date of the promulgation of this decision saying that I, Joseph Estrada, am qualified to run for president, is significant to me personally because it was exactly on this day nine years ago, Jan. 20, 2001, when the honor to serve the Filipino people as president was stolen from me. Today, the opportunity to serve has been returned and it seems as if I am being told that I need to complete the mission that my administration started in 1998," said Estrada.

ALTERNATE URL: http://www.classicposters.com/headlines/20100121hed1.html
Posted by Jesusa Bernardo at 6:19 AM

The Truth behind the Philippine Presidency and the 2004 Elections

The Conspiracy of Edsa 2: How Gloria Arroyo managed not to let President Joseph Estrada Finish His Term

Well, I'm just hope for a clean and safe election this 2010. And who ever wins as the race for presidency, I wish he/she can change our country from its current state. Anyway, I've been looking for topics as interesting as this. Looking forward to your next post.