Despite my partisan optimism that former President Joseph "Erap" Estrada will regain the seat that he undemocratically lost during the 2001 EDSA 2 power grab by way of a new mandate in an orderly elections come May 10, 2010, what I actually expect is CHEATING. In that Gloria-evil-perpetuated cheating scenario, GIBO will emerge the "victor."

The 'VILLAROYO' talk of a 'secret' administration candidate strikes me as a charade. Just look at Gibo's obstinate "loyalty" to the Illegitimate President. This, amidst incessant reports of  presidential contender Manny Villar's (or Noynoy Aquino's?) supposed secret deal with Gloria Macapagal Arroyo, in which scenario Arrobo will be allowed to sit as House Speaker and then possibly alter the constitution to allow her to become Prime Minister.

Gilbert "Gibo" (daw) Teodoro rationalizes his astoundingly unwavering loyalty to his president by professing to don the Filipino value of "utang na loob" (sense/feeling of gratitude or indebtedness). How in heaven's name did the administration party's standard bearer come to regard the "Most Corrupt President in Philippine History" as worthy of his gratitude?

Then Vice-President Gloria showed nary a sense of utang na loob towards then incumbent President Joseph Estrada when she and her husband took part in the 2001 power grab. After all, Estrada trusted her so much so that he made her a cabinet member, appointing her Secretary of the Department of Social Welfare and Development. No less than the First Gentle__g Mike Arroyo divulged their crucial role in the ouster of Erap when he detailed "Plan A" and "Plan B" to acclaimed writer Nick Joaquin during the March 2001 Philippine Graphic magazine interview. If the object of the LAKAS official presidential candidate's professed utang na loob does not know gratitude, why would a seemingly intelligent man like Gibo insist on professing loyalty to Arroyo supposedly based  on that Filipino value?

Gibo being tied to a selfish, megalomaniac creature like Gloria by utang na loob makes no sense. Unless the rope of loyalty is more of  a dark scheme glued by the collusion of corruption with a vision of the post-May-2010 perpetuation of such a demonic arrangement. Take note of the danger signs abounding--Comelec mock polls showing 50% disenfranchisement; voters' list not being purged properly enough (the Board of Election Inspectors, instead of the computer, made in charge of the operation); Supreme court-upheld Comelec decision to push through with full automation despite non-pilot testing in what should have been two areas each in two provinces, municipalities, and cities; virtual elimination of security measures; PCOS failure; human intervention in the balloting, with the BEI doing checking for authenticity with hand-held UV lamps; and even printing errors that have misaligned the ovals, rendering them unreadable.

More disturbing is the Illegitimate government's apparent inclination to call the elections fraudulent. National Security Council chief Norberto Gonzales recently claimed that cheating for the 2010 polls has begun. Conveniently not naming names, Gonzales said candidates have supposedly started bribing officials of the COMELEC, Armed Forces of the Philippines and the Philippine National Police.

How ridiculous is it to hear the administration camp responsible for the 'Hello Garci'  2004 presidential electoral fraud operations warning about looming cheating in the coming polls? Further, this unsupported 'warning' comes amidst mainstream survey results showing their standard-bearer Gibo as tailender candidate. Doesn't this sound like a Plan B in case automated cheating fail.  Doesn't it sound like a propaganda ploy to condition the people's minds into peacefully accepting a failure of elections scenario in the bid to somehow stall Arroyo's step-down from power? Perhaps, create a mayhem situation to allow the outgoing Illegitimate to consolidate power and take power anew on her own terms?

The dangers signs of cheating for Gloria's continued de facto reign are too great to ignore. Gibo's unfaltering loyalty to his illegitimate, most unwanted "President" is equally disturbing. It is not difficult to see that Gloria would not be willing to face charges for her string of gargantuan crimes committed against the nation during her horrific nine-year reign. As insurance against her likely incarceration when she steps down, the Illegitimate simply  WONT allow a non-ally to take her place. Nobody should lose sight of that. 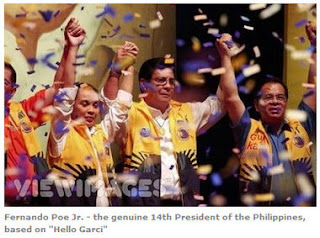 The Filipino people should not let them be taken in for another Gloria ride. Never underestimate the evil's mind! Despite his low survey ratings, Gilbert Teodoro, with Gloria's more-than-willing conspiratorial help, might just pull off the second biggest electoral (fraud) surprise in the nation's history. Next, of course, to the 2004 cheating conducted against Fernando Poe Jr., the genuine 14th President of the Philippines.

An automated Hello Garci this May? If the Filipinos failed to protect their votes in 2004 when elections were manual, how much more now with compromised "automation." All eyes on Gibo now.

I'm sorry but as a genuine supporter of Mr. Teodoro and a believer of his advocacies, I feel offended by your insinuation that there will be cheating in the May 10 elections to favor Gibo. For all we know, there are camps there who desperately want to win the elections and will do everything to destroy the man who has many silent supporters. Or maybe, you are afraid that your candidate, who may be on the first or second place in the surveys, might lose to Mr. Teodoro who is projected by the media as a probable loser in the elections? Worry much?

Hi Anonymous. Thanks for dropping by.

I'm sorry if you feel offended, but that's what I see. Everything I want to say on this issue is just about contained in the article.

If only your candidate, the intelligent and good-looking Mr. Teodoro, ain't that "tuta" to Gloria... (pls. don't give me that 'utang na loob' daw line)

Your caused me to look at every statement from Lakas-Kampi-CMD and Giba's camp.Considering this regime's record and its party in 1992 and 2004.That's why I'm blowing the siren not only once.Your blog post's warning is very timely,as the PCOS machines are in trouble.