by Prof. Jose Maria SisonFounding ChairmanCommunist Party of the Philippines


JULIE and I wish to express our most heartfelt condolences to the children and other relatives of Maita Gomez; and to all her comrades and friends. All of us are deeply saddened by her unexpected demise.

Until her cardiac arrest, we had thought that she had many more years to serve the people in their struggle for national liberation and democracy and the women in their struggle for gender equality and for their full participation in all social endeavors. Nevertheless, her life is full of significant and outstanding achievements in fulfilling her revolutionary commitment and in rendering service to the people and the women’s liberation movement. 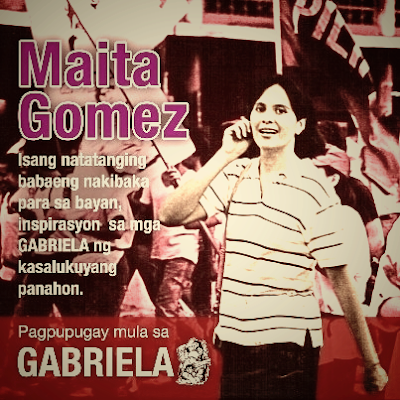 Since the resurgence of the anti-imperialist and anti-feudal movement in the Philippines in the 1960s, the patriotic and progressive forces have always taken a special interest in the development of the women’s movement and in the increased participation of women in the struggle for national liberation and democracy.

We are enlightened by the writings and deeds of revolutionary women leaders like Clara Zetkin and Aleksandra Kollontai and inspired by the heroic examples of Gabriela Silang, Melchora Aquino and other revolutionary Filipino women leaders. We are guided by Mao’s teaching that the women hold up half of the sky. The activists of the Student Cultural Association of the University of the Philippines, the Women’s Bureau of Kabataang Makabayan and the women in the labor unions, peasant associations and professional circles carried forward the progressive role of women.

As cadres of the national democratic movement, we were elated by the emergence of Malayang Kilusan ng Bagong Kababaihan (Makibaka) from the Women’s Bureau and women members of Kabataang Makabayan and the dramatic ways by which Makibaka demonstrated the necessity and importance of the role of women in the struggle to achieve the radical transformation of society in all major respects.

Makibaka and its leading figure Lorena Barros succeeded in drawing to the progressive movement women who were nationally prominent. They included beauty queens who won in prestigious pageants and were known to be exceptionally intelligent. Among them was Maita Gomez, Miss Philippines of 1967. They used their celebrity status to advantage in denouncing not only the reactionary character of beauty contests but also the entire ruling system. They spoke on major issues affecting women and the entire people. 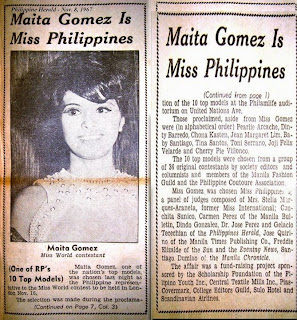 Maita was inspired and energized by the First Quarter Storm of 1970. She wanted to be a revolutionary. And she availed of the opportunities in sight for learning about the revolution. Thus, she was drawn towards Makibaka. But she had more comprehensive and intensive studies on Marxism-Leninism and Philippine society and revolution in the Humanist League of the Philippines which was a small and laid-back group in the University of the Philippines, under the influence of the Cultural Bureau of the Communist Party of the Philippines. 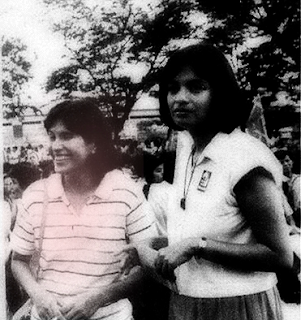 After the First Quarter Storm of 1970, in which women youth activists mobilized themselves in large numbers, Lorena Barros came to our mountain camp in Barrio Dipogo in Isabela to report on developments in the women’s movement and to discuss plans for Makibaka. She was proud of how effective were Maita and other beauties of national renown in propagating the patriotic and progressive stand on national issues. Their celebrity status drew attention to the issues.

When martial law was proclaimed by the Marcos regime in order to impose a fascist dictatorship on the people, Maita decided to go underground in Manila. She was brought eventually to a guerrilla zone in Southern Tagalog. She was brought back to Manila when her presence in the guerrilla zone drew a lot of attention and posed security problems. Thus, it was decided that she would do underground staff work in Baguio City. 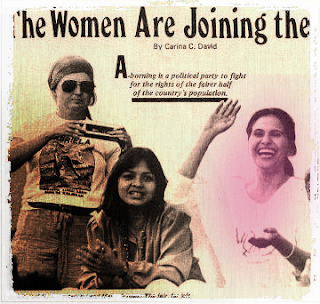 The house she was in was raided by the enemy and she was arrested. Through the National Liaison Committee of the Party, I came to know her plan to escape from Camp Olivas and I monitored how she actually escaped, with the help of a military officer who brought her out of the camp with him. Then some comrades in charge of accommodating Maita became concerned about the behavior of the officer. A further plan was undertaken to take her away. I learned later that when the officer refused to let her go she had to disable him so that she could escape.

I can relate only what I came to know about her from organs of the Party. I leave to others to narrate in more detail how she stayed in the urban underground for a while after her escape and then how she was redeployed together with her beloved Joey Decena to a guerrilla zone in Central Luzon where they bore arms, marched and lived as guerrilla fighters and where he died as a martyr in a battle. When she fell sick, she was brought to Manila for treatment and recovery. Sometime afterwards, she was arrested and became a political prisoner for sometime.

While I was in prison, I learned that Maita was released. She subsequently joined the legal movement against the Marcos fascist dictatorship in the 1980s. She co-founded the Gabriela in 1984. This emerged the largest patriotic and progressive alliance of women’s organizations. She became one of the principal leaders of the Women for the Ouster of Marcos and Boycott (WOMB) in 1985. She co-founded in 1986 the first political party of women in Philippine history, the Kababaihan para sa Inangbayan (KAIBA).

Julie met Maita in 1983 and they became friends as they worked together in the movement to oust the Marcos fascist dictatorship. The three of us met at her Ermita apartment after I was released from military detention in 1986. We became barkada, attending many public meetings and social gatherings together. On many occasions, we exchanged ideas about women and the revolutionary movement. She was then engaged in women’s studies as an activist, scholar and teacher at St. Scholastica. We had become very close comrades and friends by the time Julie and I left for abroad for our global university lecture tour at the end of August in 1986. 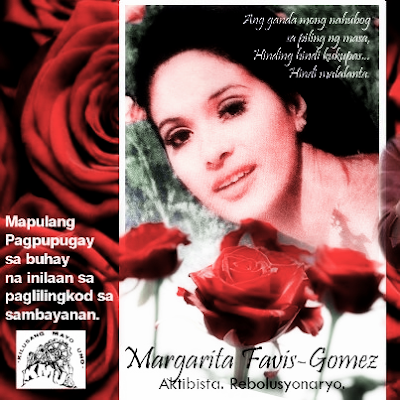 From abroad, I learned that she had serious differences with Popoy Lagman with regard to the 1986 and 1987 elections. She drew away from his organizational sway. But she stayed committed to the principles of the revolutionary movement. I sent word to her to stay firm in order to encourage her. She welcomed the Second Great Rectification Movement and became more active in the national democratic movement. I leave to others to narrate how she spoke and fought in the service of the people from the 1990s to the time of her death.

I met Maita for the last time in May 2009 in Amsterdam. She was winding up her work with the IBON Foundation as an economic research consultant. And she was happy that in the previous month she was elected co-chairperson of the Makabayan Coalition and that Gabriela which she had co-founded celebrated its 25th anniversary and all its glorious achievements. Our conversation was wide ranging, covering so many serious ones and funny ones. It lasted from about 8 pm to 4 am. She was optimistic about how the patriotic and progressive forces would advance further in the legal democratic movement and in the anticipated elections of 2010.

We are all proud of our beloved Comrade Maita Gomez as an outstanding freedom fighter. She has bequeathed to us and future generations a rich legacy of writings and activism in the service of women and the entire people. We shall always love and remember her because of her hard work, intelligence, sacrifices and all her positive contributions to the national democratic movement.###

we can also exchange link.