Ka Joma, I would like to get your insights on Corona’s removal from the SC through impeachment.

Here are some questions:

1. What is your analysis on the removal of Corona from the SC? What do you think are the factors why the Aquino regime is very eager on this  matter?

Answer: The removal of Corona is a manifestation and offshoot of the conflict between the Aquino yellow gang in power and the Arroyo gang. It is more specifically about Noy Aquino punishing Corona for the Supreme Court decision on Hacienda Luisita. Most importantly, it is strategically about taking over the Supreme Court and dominating the  reactionary government. 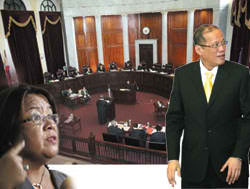 2. What will be the next step of the Aquino administration, especially that they are already pushing to control all the branches of the government?

Answer: The Corona trial and conviction show that the Aquino regime now controls all three branches of the reactionary government. And the regime is going to tighten its control in several ways, especially through the forthcoming 2013 elections. Take note that Aquino controls not only his ruling Liberal Party but also the party and coalition UNA of his close buddy Binay and his uncle Peping Cojuangco. Aquino and Cojuangco now monopolize political power and the opportunities to accumulate far more wealth than ever before. There is no other significant reactionary force trying to oppose the regime.

3. Your reaction on: Aquino administration using all its machineries, including the media, to depose Corona and other enemies of their administration.

Answer: It was money and media manipulation that made Noynoy president and demolish his opponents. Once more he has used money, media and government machinery to demolish Corona and force him to make mistakes in his legal defense. What is most dangerous about the Aquino yellow gang is that it can use the military as well as money and the media to attack and suppress not only any intra-systemic opposition but also the patriotic and progressive forces.

4. Did the US intervene in Corona’s removal from office?

Answer: The US has special interest in keeping Aquino in power because he serves US interests. But I do not think that the US had to intervene in the removal of Corona. Noy Aquino and the yellow gang in the media and in government could very well do the job of destroying Corona.

5. How will the Aquino government choose the next Chief Justice of the Supreme Court?

Answer: The Judicial & Bar Council is supposed to recommend the eplacement of Corona. Any president controls this body and chooses from the list of recommendees it submits formally.

6. What else should we expect from the Aquino regime after Corona’s removal? Will they still do something to stop the distribution of Hacienda Luisita?

Answer. It is still possible for the Aquino regime to reverse or undercut the Supreme Court decision on Hacienda Luisita. The farm workers are vulnerable to the machinations of a cacique president. But the Aquinos and Cojuangcos do not have to blatantly cast away the previous Supreme Court decision. Anyway, they can make bigger money  elsewhere, such as in the infrastructure and energy projects, military purchases, mining, new plantations and so on.

7. What should be done by the people to stop Aquino from controlling all the government branches?

Answer: The patriotic and progressive forces should be vigilant and militant. They should expose and oppose by all possible means the Aquino regime’s puppetry to the US imperialism, corruption, plunder and human rights violations. They should arouse, organize and mobilize the masses. They should not be misled or confused by Aquino’s daily manipulation of the media and should not be intimidated by his use of  the military.