The "Pagpag" Legacy of the Yellow Administrations of the Philippines

After Ferdinand E. Marcos was deposed, democracy was supposedly restored and the lot of the Filipinos improved. Or is it? Beyond what have now been called the "yellow surveys" and official government pronouncements of economic growth, the better gauge of what our people has become is what they EAT, or what the poor people stuff their stomachs with. 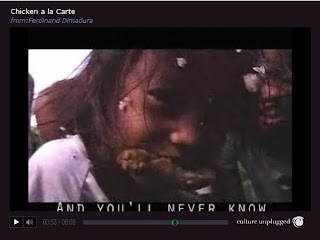 The (forced by poverty) eating habit of the marginalized sector of a country speaks not only of the level of poverty of the poor but also of the indignity (or otherwise) that they are experiencing. After three successive yellow presidents--interrupted only by the brief leadership of Joseph Ejercito Estrada, the only one with the most definitive and unquestioned electoral mandate of the Filipinos--ever wonder what is the state of this country called the Philippines (but which I'd prefer to be renamed as either Taga-Ilog or Maharlika)?

The following, an award-winning sort-of documentary film, made several years after Gloria Macapagal Arroyo's "EDSA 2" power grab, perhaps best describe the continuing piteous plight of the urban poor Filipinos. A short film entry to the 56th Berlin International Film festival, it topped the competition when it was adjudged the Most Popular Short film.

While Dimadura wants to bring the point that globalization causes world hunger, his thesis is unsupported, apparently because of its delimiting mere 9-minute run. Besides, isn't it that in a country where the government is run by patriotic, moral, truly elected servants of the people who do not exploit but truly serve the nation, whatever ills globalization brings are dutifully addressed. In such countries, the table scraps (kaning baboy) are recycled for the animal consumption and definitely NOT the poor people's.

As a social reality film, Dimadura's work works to haunt the mind and the conscience. Perhaps wanting to make the rich or comfortable among us not forget nor feel indifferent, he completes the affecting, perhaps revolting, images with his own musical composition that should strike at the hearts of us all:


"Let me tell their story that no one else can hear./
How can someone's laughter bring me close to tears?/
And you'll never know cause you're never there./
After what we've seen, can we close our eyes again?/

Let me tell their story you won't think is true./
I have not forgotten so I'm sharing it with you./
For all the things we know what have we really learned?/
Though i close my eyes the images remain./
And their story begins... again."

As we remain under the clout of the ruling elites under the newly seated HOCUS PCOS Illegitimate, watch and ponder on the true, or more real, unfortunate legacy of the yellows.


View this movie at cultureunplugged.com
Posted by Jesusa Bernardo at 5:04 PM