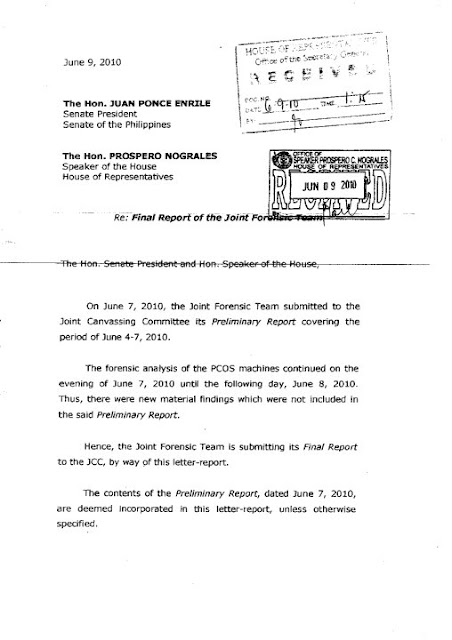 Senate of the Philippines

Speaker of the House

Re: Final Report of the Joint Forensic Team

The Hon. Senate President and Hon. Speaker of the House:

On June 7, 2010, the Joint Forensic Team submitted to the Joint Canvassing Committee its Preliminary Report covering the period of June 4-7, 2010.

The forensic analysis of the PCOS machine continued on the evening of June 7, 2010 until the following day, June 8, 2010. Thus, there were new material findings which were not included in the said Preliminary Report.

Hence, the Joint Forensic Team is submitting its Final Report to the JCC, by way of the letter-report.

The contents of the Preliminary Report, dated June 7, 2010, are deemed incorporated in this letter -report, unless otherwise specified.

Considering that the JCC was adjourned on June 8, 2010, the mandate of the Joint Forensic Team was considered terminated on the same date, too.

Examination of the PCOS machines revealed that there was no evidence found to prove the existence of digital certificates in the PCOS machines, contrary to the claims of Smartmatic. The technicians of Smartmatic were not able to show to the forensic team the machine version of the digital signature, alleging that they do not have the necessary tool to show the same. More so, they were at a quandary as to how to extract the said machine signatures - to the dismay of the forensic team.

PCOS Machine Can Be Controlled Through Its Console Port.

The PCOS machine contains a console port [footnote3], which Smartmatic claimed is only a one-way output port, used for diagnostics purposes only. The forensic team, with the allowance of Smartmatic technicians, was able to connect an ordinary laptop computer to the console port of a PCOS machine, via a serial cable provided by the latter.

To the surprise of everyone, the serially connected laptop computer was able to access the operating system of the PCOS machine. Furthermore, the connection was done in an unsecure manner - meaning no username and password was required by the PCOS machine.

The Linux operating system of the PCOS machine was exposed to full access and control via the externally connected laptop computer through its "sash" interface [footnote4]. The "sash" is a command-line interface that allows the user to interact with the PCOS machine.

One can readily issue Unix shell commands (similar to Windows C:\> prompt command line) and take control of the operations of the PCOS machine. The same access can tap the PCOS machine's on-board Random Access Memory (RAM) as a RAM Disk for data swapping and temporary date storage.

Smartmatic cannot offer a technical explanation for this major loophole.

The Joint Forensic Team accommodated the request of Hon. Anne Susano (Congresswoman, Quezon City) to subject the CF cards in her possession to forensic analysis.

This finding would then belie the announcement of the COMELECT NCR Director that all the CF cards within Metro Manila had all been accounted for and turned over to COMELEC.

The Recommendations and Conclusions, as embodied in the Preliminary Report remain standing except for Item No. 1, which should now read, as follows:

It is further recommended that the forensic analysis of the PCOS machines be allowed and expanded by the incoming 15th Congress to include those PCOS machines which are subject of electoral protests and suspected of having been used as instruments of electoral fraud.

For your consideration and approval.

For the Joint Forensic Team

3 See Annex "I" for visual appreciation 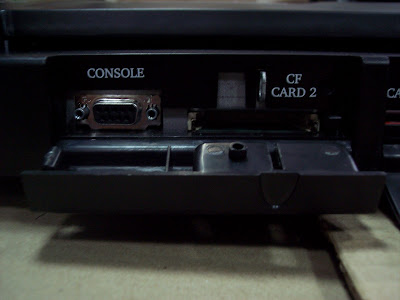