“Please be advised that because of the supervening widespread fraud and irregularity in the verification and counting of ballots that point out to the violation of the sanctity of the ballot and thus infringe upon the suffrage right of the electorate, I am hereby withdrawing my conceding the elections.” ### 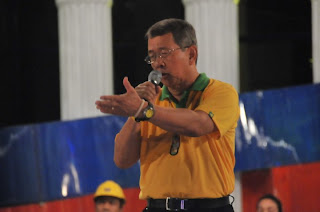 The right of suffrage, which includes the right to vote for our representatives in government, is the centerpiece of our nation’s democracy. Any deprivation, curtailment or limitation of such fundamental right upon any citizen through an election system that fails in meeting the standards for the secrecy and sanctity of the ballot makes the exercise of such right a sham. Furthermore the lack of transparency in the registration and appreciation of the ballot, where the public is unable to effectively monitor, swiftly examine and verify the process for any fraud, irregularity and manipulative conduct, including unintentional errors in the receiving and accurate counting of votes makes any democracy untenable.

In carrying out its mandate under the Constitution the Congress enacted Republic Act 9369, authorizing the Commission on Election to use an automated election system, which among other things, required minimum functional capabilities including the: (1) accuracy in recording and reading of votes as well as in the tabulation, canvassing, electronic transmission and storage of results; (2) provision for voter verified paper audit trail; (3) system auditability, which provides supporting documentation for verifying the correctness of reported election results and (4) which provides a system of verification that the machine has registered the voter’s choice. The minimum systems capabilities of the AES were intended to secure and protect the sanctity and indestructibility of the ballot. It requires that the voter must be able to verify, without detailed knowledge of computers, whether or not his or her vote as cast is truthfully recorded. Blind and ignorant reliance upon the capability and functionality of an automated system is not enough. The ability to personally inspect and confirm the proper and accurate registratiration of the vote is imperative. Indeed, simply being informed by an electronic display that the voter’s ballot has been registered, without benefit of verification for truthfulness is grossly inadequate.

We have received alarming reports and complaints from a growing number of voters who attest that their choice of candidates in the May 2010 election have not been properly registered or counted by the PCOS machines. They claim under oath that in the precincts where they voted, the election results show a much lesser number of votes obtained by Bangon Pilipinas candidates than the actual number of votes cast in their favor. They also claim that the PCOS machines in their clustered precincts do not provide them with any receipt, record, documentation or any other visible means of verifying the registration of their choice of candidates, thereby clearly violating the requirements of the law and the Constitution. These complaints which could ultimately involve millions of voters are matters of great and urgent national importance because they impact on the right of suffrage of the citizenry and constitute a grave threat to Philippine democracy.

While the AES has been popularly applauded for the efficient speed at which it has determined the election results and virtually eliminated some forms of cheating arising from the undue delay in the counting of votes, efficiency or expediency in determining electoral results can never compromise or substitute for the sanctity of the ballot which must at all times be protected.

For this reason, Bangon Pilipinas is thoroughly verifying these reports and complaints and has also asked its team of lawyers to study the possible adequate remedies to uphold and safeguard the sacred rights of the electorate and to submit their recommendations as quickly as possible.

We would like to assure everyone that the actions or remedies that Bangon Pilipinas will take, if at all necessary, will be for the Filipino people and not for the purpose of questioning the victory, prevent or contest the proclamation of any candidate as the winner in this historic electoral contest. In fact it will not be about protecting or upholding the rights or claims of any candidate. Its singular purpose is to preserve and defend our democracy by ensuring the secrecy and sanctity of the ballot of the citizenry as guaranteed under our Constitution. In this regard, we invite all voters who may have similar reports or complaints to come forward for the protection of their sacred right. ###

Posted by Jesusa Bernardo at 7:07 PM