LAST February 15, 1010, alert divers in Batangas found the  grisly sight of a floating, mutilated dying, whale shark with its fins removed. According to World Wildlife Fund for Nature (WWF), it condemns the poachers who did the illegal act--as well as all poachers who continue to defy conservation laws.  The conservation group calls on all sectors to step up enforcement efforts throughout the Philippine Islands.. WWF's Conservation Programmes VP Joel Palma warns that the many poachers at large "will not be at rest just because we are.” 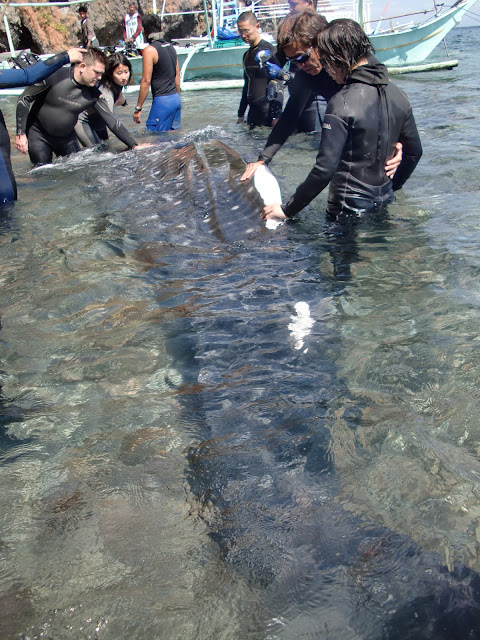 Caption A - Divers inspect the ailing whale shark on the afternoon of
15 February. (Contributed WWF photo)
Press release from WWF:


Batangas, the Philippines – An 18-foot long whale shark (Rhincodon typus), de-finned and fighting for life, was found floating belly-up amidst the rough waters of Bahay Kambing, a sheltered cove in the municipality of Tingloy. Its twin pairs of dorsal and pectoral fins were neatly sliced off – the soft, white flesh glistening in the morning rays. Knife-marks were evident all over its tail – mercifully too think to cut through.

“Scuba divers from Mabini’s Acacia Resort first discovered the mutilated shark on the morning of 15 February,” recounts Casita Isabel resort owner Linda Reyes-Romualdez. “The shark was towed to nearby Caban cove, whose waters were more placid. Together with a Bantay Dagat unit, volunteers splinted the shark by flanking it with bamboo poles and installing a net underneath to minimize further injuries. We wanted to ease its pain.”

Sadly, its wounds were too great – and the shark, nicknamed Tingloy Baby, died the next day. The incident came right after the conclusion of the third Convention on Migratory Species for Sharks, held in Manila from 8 to 12 February. The talks were held to safeguard shark populations in the Indo-Pacific region. Tingloy Baby was laid to rest in Caban cove. It did not die alone nor in vain.

Bantay Dagat units from Mabini reported that for several days, fishing vessels equipped with powerful strobe lights have been operating in Mabini waters, sometimes as close as 300 meters from shore. Responding to complaints from local resorts, the Bantay Dagat and local police asked the fishers – reportedly from Lemery, Batangas – to leave. They did.

Several nights later, the fishermen returned, this time in the adjacent municipality of Tingloy. Mabini did not respond directly, for the area was under Tingloy’s jurisdiction. The fishing went on until concerned divers informed Mabini of the grisly discovery. 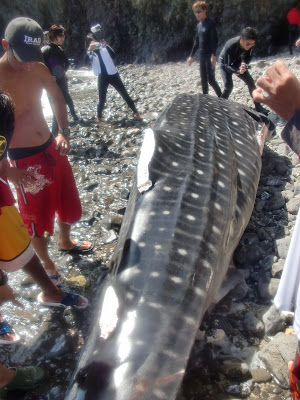 Bureau of Fisheries and Aquatic Resources (BFAR) Director Malcolm Sarmiento said a full investigation will be conducted to find and prosecute the culprits. Sarmiento has committed BFAR’s support until a better enforcement strategy can be developed between the twin towns of Mabini and Tingloy.


“WWF condemns the perpetrators of this illegal act,” declares WWF-Philippines Conservation Programmes Vice-President Joel Palma. “This is a real eye-opener, for it proves that the slaughter of endangered species – even one as big as a butanding – can still take place if we let our guards down. The public and private sectors must come together to refine and polish current conservation mechanisms.”


Caption B - A clearer view of Tingloy Baby, with its dorsal and
pectoral fins shorn off. It died on the morning of the 16th.
(Contributed WWF photo)

BFAR reported that at least 200 whale sharks were slaughtered in 1997 alone. On 15 January 1999, 64 boxes labelled as Lapu-lapu or grouper meat made it through the Mactan-Cebu International Airport and were shipped to Taiwan. Taiwanese authorities later informed authorities that the boxes contained whale shark meat. WWF has long spearheaded whale shark conservation in the Philippines, and together with the DENR and BFAR successfully lobbied for their legal protection – which took effect in1998.

Whale sharks are now classified by the IUCN as vulnerable and are protected by Philippine law under Republic Act 8550 and Fisheries Administrative Order 193. The possession or slaughter of a single whale shark merits a maximum jail term of four years, coupled with a maximum fine of P10,000 and the cancellation of the offending party’s fishing licenses. Whale sharks accidentally caught in fishing gear must be immediately released, while whale sharks which have drifted to shore must be surrendered to the nearest BFAR office. Manta rays (Manta birostris) are also covered by the order.

WWF calls for all sectors to step up enforcement efforts nationwide. Adds Palma, “More poachers are out there – and they will not be at rest just because we are.”

Says WWF-Philippines Vice-chair and CEO Lory Tan, “The challenges that face Mabini and Tingloy are founded on a persistent dissonance between the expectations of the private sector versus the capacity and interest of the public sector to deliver on those expectations. The years have proven that government cannot do this alone. The apparent lack of clear, self-triggering procedures stands in the way of improved cohesion. A sense of shared responsibility, though obvious with some, is not common to all. A much more participative public-private framework, with rigorous standards for accountability may provide the way forward. Unless we resolve the disjoint that exists between expectation and delivery, these problems will recur.”

Posted by Jesusa Bernardo at 2:16 PM