ILPS & the Centennial of the First International (Toiling) Women’s Day

By Prof. Jose Maria Sison
Chairperson
International League of Peoples’ Struggle
8 March 2011
We, the International League of Peoples’ Struggle, express our most militant greetings to women all over the world and join you in the celebration of the centennial of the International Women’s Day.  The history and current trend of militant women’s struggle must be highlighted in the midst of the global depression and chaos that pervade the various regions of the world today. 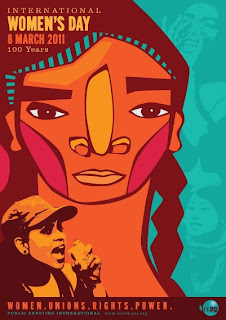 The first International Toiling Women’s Day was proclaimed in 1911, to mark the role of the women in the industrial revolution and celebrate the gains of the women who marched to the streets to fight for their rights and welfare.  During that time, the exploitation of women and children in the factories, in the fields and in their homes fed capitalism and allowed it to flourish.

One hundred years later, women continue to struggle, this time against global monopoly capitalism that unleashes the worst forms of exploitation on the toiling classes.  Imperialism has worsened the condition of women.  Although women produce 60 to 80 percent of the food, they comprise 75 % of the 1.3 billion people who subsist on less than $1 per day.  They are the majority of the more than 800 million people who are deprived of food security.

In the countries impoverished by imperialism and local reactionaries, women are displaced from their lands and livelihood as peasants and agricultural workers.  As workers, they receive lower wages and are deprived of benefits, from health care and social security to overtime pay as labor contractualization became the norm to extract more profits for the capitalists.

They comprise about 50% of migrant workers who are forced to leave their families to seek employment abroad only to face discrimination and abuse in the host countries.  The exploitative labor export policy in their home countries is within the imperialist scheme of extracting superprofits from cheap labor.  In extreme circumstances, women fall prey to human trafficking and are forced into prostitution because of sheer lack of viable and decent employment opportunities and systematic deprivation of rights. 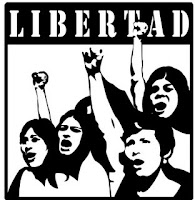 With the current protracted global economic depression, women and the rest of the people are more exploited and abused.  As imperialism tries to save its decadent and moribund rule, it directs the servile local reactionary powers and its puppet regimes to adopt uniform last-ditch measures of intensified exploitation through neoliberal economic policies, constitutional reforms, and outright repression under the US-instigated global war of terror.

The miserable conditions, made more intolerable by the global crisis, incite the people to resist and build their revolutionary strength.  Across the continents, mass uprisings and revolutionary struggles for national liberation and democracy are toppling dictators and lackeys of imperialism and are opposing the intervention and aggression of the US and other imperialist powers. Women are rising up in great numbers with the men and taking a prominent role in all the mass struggles in Asia, Africa and the Middle East.

In the current sweep of people’s uprisings in North Africa and the Middle East, the authoritarian regimes of Tunisia and Egypt have collapsed. Those in Bahrain and Yemen are tottering.  A full-blown civil war is in progress in Libya and the imperialist powers headed by the US are maneuvering to launch aggression and seize the oil wealth for themselves.  As part of the people’s movement, women in these countries have found their voices and raise their strength to fight for their rights, welfare, and emancipation, despite the deep-seated feudal and patriarchal culture. 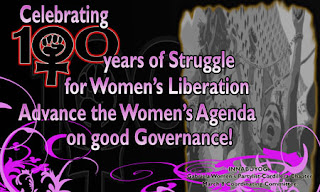 There is no room for complacency as the struggle of the peoples against their oppressors intensifies and spreads.  Imperialist powers led by US will not allow their grip on the global economy to loosen and slip with the fall of their lackeys and the rise of the people’s movements across the world.  They will try with might and main to retain or regain their dominance and apply measures for their client-states to appear stable.

As part of the people’s revolutionary struggle, the women’s movement is continuously challenged to maintain vigilance and engage in militant work against the imperialist powers and all their machinations.  The seeds for the triumph of a people’s democratic revolution have been planted and the ground is fertile to nurture the revolutionary fervor that is spreading across the world.  It is essential for women to play their vital and crucial role in the people’s struggle for national liberation, democracy and socialism.