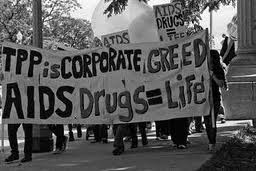 THE International League of Peoples’ Struggle resolutely condemns the drive of the US government and its monopoly capitalists to realize the Trans-Pacific Partnership Agreement (TPPA) as a scheme to impose their power over trade and investment flows. This would aggravate the exploitation of the working people and the environment as a way of raising superprofits and seeking to cope with the grave economic, social and economic crisis.

The TPPA was initiated by the Bush regime. Since March 2010, negotiations have been proceeded, with the objective of creating a legally-binding free trade agreement for the Asia-Pacific region. Right now, the TPPA talks involve nine countries – the USA, Australia, New Zealand, Brunei, Peru, Chile, Viet Nam, Malaysia and Singapore. Japan is poised to join. The USA has free trade agreements (FTAs) with four of the nine countries.

The TPPA is conceived of as an economic dimension of the growing US confrontation with China. This is a confrontation which is a growing danger to world peace. Peoples’ organizations in the nine countries covered by the TPPA have therefore agreed to expose and oppose the callous and unjust demands of the US corporations and the US Trade Representative regarding the TPPA.

At first, the talks on the TPPA advanced when the US delegation put forward specific text, revealing that the entire TPPA process is US-driven. Delays arose when the US Trade Representative waited for the FTAs of the US with Colombia, Panama and South Korea to be ratified by the US Congress.


What are the objectives of the US corporations in the TPPA?

These are: 1) to subordinate the health and medicines policies of all other countries to the demands of giant US pharmaceutical companies, including the extension of patent rights to allow the charging of higher prices for a longer period, and restrictions on the right of governments to control prices for medicines; 2)to require that all government procurement be open to US corporations – no local content or local training polices; 3) to require that all media policies that support local cultural content be abolished, allowing complete domination by US media corporations; 4) to impose US copyright law on all other countries – greatly extended copyright and royalty payments which greatly favour US corporations; 5) to make internet service providers criminally liable for any copyright piracy on their networks; and 6) to demand tariff-free access for US exports into all markets, while limiting corresponding access to US markets.


What would be the result?

This neo-liberal over-reach by the giant US corporations would deliver a disastrous blow on jobs, health, and freedom of communications and information in the entire Asia-Pacific region.

The just response to these outrageous dictates of US monopoly capitalism is for the people to mobilize themselves and and protest! And the people’s protests have taken place in Auckland New Zealand, Chicago and Peru, three of the sites of negotiating rounds.

The people’s campaign has been effective. The initial objective was for the TPPA deal to be signed by November 2011, and unveiled at the Asia-Pacific Economic Cooperation Leader Summit in Honolulu as the blueprint for all member economies, including most of the ASEAN nations, Russia and China. But now that won’t happen.

Instead some kind of progress report may be given to APEC and then talks will proceed into 2012. The opposition of trade union, health and media sectors to the US corporations in the US itself and in other countries has delayed this obnoxious scheme. The ILPS is determined to work vigorously in cooperation with other forces in order to expand and intensify the people’s protest movement against the TPPA.###