WHOLEHEARTEDLY I am in soildarity with the leadership, membership and the supporters of the Kilusang Magbubukid ng Pilipinas in celebrating its 25 th founding anniversary. It is important for the entire nation that we celebrate the continuous struggle of the peasant movement for genuine land reform, to honor the peasant martyrs who have sacritifed their lives and to strengthen the spirit and movement of the leaders and members for justice and freedom through land reform against the semicolonial and semifeudal ruling system. 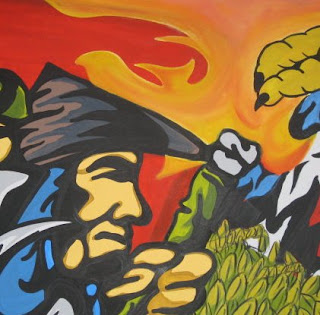 I consider as a great honor that in July 1985 I was able to give a message of solidarity tot first national congress of the KMP despite the fact that I was still detained in Fort Bonifacio. I am even more greatly honored by giving again a message of solidarity now because of the many victories that you have harvested in the last 25 years of struggle and sacrifices for advancing the peasant movement and land reform and the general struggle of the people for national liberation and democracy against imperialism, feudalism and bureaucrat capitalism.

It is commendable that KMP has a high level of political consciousness and has won significant victories, mainly in asserting the rights of the peasants over the land that they till. I salute you for the continuous expansion and consolidastion of your organization at various levels. I admire the KMP for having 65 provincial chapters and 15 regional chapters in Luzon, Visayas and Mindanao.

Your struggle against the policies dictated by US imperialism and carried out by the Arroyo puppet regime is astounding. You have opposed the policy of neoliberal globalization, especially its laying aside of land reform, destruction of food production for the people and the bargaining away of land and natural resources to foreign corporations. You condemned the policy of imperialist aggression and state terrorism masquerading as war against terrorism. And you have vigorously opposed the real terrorism of Oplan Bantay Laya and the intervention of US military forces under the Visiting Forces Agreement.

KMP has courageously fought the laws, policies and programs that aggravate the exploitation and oppression perpetrated by the by the landlord class and foreign corporations. You have intensified your resistance in response to the assasinations, massacres, torture, unwarranted arrests and detention and the displacement of the peasants from their homes and land. You have effectively fought not only the barefaced enemy but also the special agents who sneaked into the KMP and whipped up factionalism.

It is gratifying that the Alyansa ng Magbubukid ng Gitnang Luson (AGML) and the Asembliya ng mga Manggagawang Bukid have prepared your gathering inside Hacienda Luisita. Several times I stayed in some barrios there in the years of 1968 to 1972. This was the period of building the new Communist Part of the Philippines and the New People's Army in the province of Tarlac. This was also the period of organizing the Pagkakaisa ng mga Magbubukid ng Pilipinas (PMP).

It is meaningful that a thousand representatives of the regional and provicial chapters of KMP are now gathered inside Hacienda Luisita in order to hold a celebration with the theme: Twenty Five Years of Persevering Struggle for Land, Justice and Freedom. You are proving that the peasant movement is firm and militant and is advancing despite cruel acts of suppression by the landlords.

In this hacienda, in 2004 and 2005 events burst out to call the attention of the people in our country and in the whole world about the exploitation and swindling of the peasants by the landlord class, the just and courageous struggle of the peasants and the massacre and subsequent killings that were the collaborative work of the Cojuangco-Aquino family and the Arroyo regime.

Now that Noynoy Cojuangco-Aquino is the president of the reactionary government, the power of the state and the instruments of violence and deception are now directly in his hands. During the electoral campaign, Aquino said that he would continue the stock distribution option swindle under the CARPer. His family continues to frustrate land reform through corporate tricks and other cruel and deceptive tactics.

At any rate, you are prepared to fight for land reform, justice and freedom. In the face of so great a challenge, it is necessary for you to raise the level of your political consciousness, accelerate the strengthening of your organisation and engage in mobilization to advance the cause for land reform and use the campaigns to raise fighting consciousness and organizational capability.

Like the Arroyo regime, the Aquino regime is a running dog of US imperialism. Aquino is now the chief representative of the pro-imperialist classes of big compradors and landlords. He is continuing the evil policies dictated by the US and carried out by Arroyo. Rabid implementers of the policies of neoliberalism and terrorism who were previous adjutants of Arroyo are now the adjutants of Aquino in betraying the Filipino people and violating national and democratic rights and interests.

During the Aquino regime, the problems of landlessness, poverty and hunger will become more grave. Aquino has no interest in land reform and national industrialization. The bloody suppression of the people will escalate. Even as the economic crisis is grave. The reactionary government is bankrupt and there are scarce resources for social services, Aquino said in his inaugural address that he would give to the military and police what ask for. He indicated that he would double the strength of the military and police because the population had doubled since the time that Marcos.

In his first military command conference, he ordered the military to give priority to so-called counterinsurgency or in fact the state terrorism. Thus, the criminal officers and armed personnel of t he state continue to engage in gross and systematic human rights violations with impunity. The Aquino regime is subservient to the US-dictated policy of counterinsurgency or terrorism. Most important in this policy is the strengthening of the reactionary military and the pretenses of the reactionary government at clean and efficient governance, delivery of social services, wishes for economic development and other types and methods of deception.

It is clear that like the Arroyo regime the Aquino regime wants to destroy the revolutionary movement of the Filipino people and perpetuate the rotten ruling system of the big compradors and landlords under US imperialism. On the other hand, we see that the people and the revolutionary forces are well-prepared to fight the escalation of exploitation and oppression as a result of the worsening of the crisis of the domestic ruling system and the world capitalist system. The revolutionary forces have declared their resolve to raise the people's war along the line of new democratic revolution from the strategic defensive to the strategic stalemate in the next five years.

As a legal mass organization with its integrity, the KMP must raise the national and democratic consciousness of the peasant masses and must promptly and earnestly face up to the many issues churned out by the crisis at the global, national and local levels. The recruitment of members must be accelerated and brought to the level of millions. The members must be recruited and local chapters must be formed (where there are yet none) through meetings to explain the constitution and program of KMP. The campaigns should be availed of by the organized masses to persuade the unorganized masses to become members of the KMP and become a firm part of the peasant movement.

I am certain that thought the simultaneous celebrations of the 25 th founding anniversary of the KMP at the national, regional, provincial and barangay levels you will be able to raise further the fighting consciousness for the rights and interests of the peasants, you will be able to put forward proposals and plans regarding education, organization and mobilization and you will be anle to expand support from various sectors in the countryside, in the entire country and the world. ###