TODAY, February 4, 2010, is the 111th anniversary of the start of the Philippine-American War. I thought a lookback is in order. The following are excerpts from the speech of William Jennings Bryan (Nebraska congressman) during his acceptance speech of the Democratic Party's nomination of him as its standard-bearer for the November 1900 presidential elections. His speech was entirely devoted to the impropriety and negative effects of American imperialism. 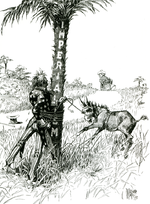 RIGHT OF FILIPINOS TO RESIST.

If it is right for the United States to hold the Philippine Islands permanently and imitate European empires in the government of colonies, the Republic Party ought to state its position and defend it but it must expect the subject races to protest against such a policy ad to resist to the extent of their ability. The Filipinos do not need any encouragement from Americans now living. Our whole history has been an encouragement not only to the Filipinos, but to all who are denied a voice in their own government. If the Republicans are prepared to censure all who have used language calculated to make Filipinos hate foreign domination, let them condemn the speech of Patrick Henry. When he uttered that passionate appeal, "give me liberty or give me death," he expressed a sentiment which still echoes in the hearts of men. Let them censure Jefferson; of all the statesmen of history, none has used words so offensive to those who would hold their fellows in political bondage. Let them censure Washington, who declared that the Colonists must choose between liberty and slavery. Or if the state of limitations has run against the sins of Henry and Jefferson and Washington, let them censure Lincoln, whose Gettysburg speech will be quoted in defense of popular government when the present advocates of force and conquest are forgotten.

...If we have an imperial policy we must have a large standing army as its natural and necessary complement. The spirit which will justify the forcible annexation of the Philippine islands will justify the seizure of other islands and the domination of other people, and with wars of conquest we can expect a certain, if not rapid, growth of our military establishment. That a large permanent in our regular army is intended by the Republican leaders is not a mere matter of conjecture, but a matter of fact. In his message of Dec. 5, 1898 the President asked for authority to increase the standing army to 100,000. In 1896 the army contained about 25,000 men....

The Republican platform assumes that the Philippine Islands will be retained under American sovereignty, and we have a right to dean of the Republican leaders a discussion of the future status of the Filipino. Is he to be a citizen or a subject Are we to bring into the body politic eight or ten million Asiatics, so different from us in race and history that amalgation is impossible? Are they to share with us in making the laws and shaping the destiny of this Nations? No Republican of prominence has been bold enough to advocate such a proposition. The McEnery resolution, adopted by the Senate immediately after the ratification of the treaty expressly negatives this idea. The Democratic platform describes the situation where it says that the Filipinos cannot be citizens without endangering our civilization. Who will dispute it? And what is the alternative? If the Filipino is not to be a citizen, shall we make him a subject? On that question, the Democratic platform speaks with emphasis. It declares that the Filipino cannot be a subject without endangering our form of Government. A republic can have no subjects. A subject is possible only in a Government resting upon force; he is unknown in a Government deriving its just powers from the consent of the governed. The Republican platform says that "the largest measure of self-government consistent with their welfare and our duties shall be secured to them (the Filipinos) by law." This is a strange doctrine for a Government which owes its very existence to the men who offered their lives as a protest against Government without consent and taxation without representation. In what respect does the position of the Republican Party differ from the position taken by the English Government in 1776?....

PRESIDENT'S WILL THE ONLY LAW.

... The Republican platform promises that some measure of self-government is to be given to the Filipinos by law; but even this pledge is not fulfilled. Nearly sixteen months elapsed after the ratification of the treaty before the adjournment of Congress last June, and yet no law was passed dealing with the Philippine situation. The will of the President has been the only law in the Philippine Islands wherever the American authority extends. Why doe the Republican Party hesitate to legislate upon the Philippine question? Because a law would disclose the radical departure from history and precedent contemplated by those who control the Republican Party. ....

TITLE TO THE PHILIPPINES

What is our title to the Philippine Islands? Do we hold them by treaty or by conquest? Did we buy them or did we take them? Did we purchase the people? If not, how did we secure title to them? Were they thrown in with the land? Will the Republicans say that inanimate earth has value but that when that earth is molded by the Divine hand and stamped with the likeness of the Creator it becomes only a fixture and passes with the soil? If governments derive their just powers from the consent of the governed, it is impossible to secure title to people, either by force or by purchase...

There can be no doubt that we accepted and utilized the services of the Filipinos [in the war against Spain], and that when we did so we had full knowledge that they were fighting for their own independence, and I submit that history furnishes no example of turpitude baser than ours if we now substitute our yoke for the Spanish yoke.

FILIPINOS SHOULD BE FREE.

Let us consider briefly the reasons which have been given in support of an imperialistic policy. Some say that it is our duty to hold the Philippine Islands. But duty is not an argument; it is a conclusion. To ascertain what our duty is, in any emergency, we must apply well-settled and generally accepted principles. It is our duty to avoid stealing, no matter whether the thing to be stolen is of great or little value. It is our duty to avoid killing a human being, no matter where the human being lives or to what race or class he belongs ....

It is said that we have assumed before the world obligations which make it necessary for us to permanently maintain a government in the Philippine Islands. I reply that the highest obligation of this nation is to be true to itself. No obligation to any particular nation, or to all the nations combined, can require the abandonment of our theory of government, and the substitution of doctrines against which our whole national life has been a protest....

... Some argue that American rule in the Philippine Islands will result in the better education of the Filipinos. Be not deceived. If we expect to maintain a colonial policy, we shall not find it to our advantage to educate the people. The educated Filipinos are now in revolt against us, and the most ignorant ones have made the least resistance to our domination. If we are to govern them without their consent ... we dare not educate them, lest they learn to read the Declaration of Independence and Constitution of the United States and mock us for our inconsistency.

The religious argument varies from a passive belief that Providence delivered the Filipinos into our hands for their good and our glory, to the exultation of the minister who said that we ought to "thrash the Filipinos until they understand who we are, and every bullet sent, every cannon shot and every flag waved means righteousness." ... If true Christianity consists in carrying out in our daily lives the teaching of Christ, who will say that we are commanded to civilize with dynamite and proselyte with the sword.... Imperialism finds no warrant in the Bible. The command "Go ye into all the world and preach the gospel to every creature" has no Gatling gun attachment....

"MR. BRYAN'S SPEECH OF ACCEPTANCE; Devotes Himself Exclusively to Issue of Imperialism. NOT ONE WORD FOR SILVER Pledges Himself, if Elected, to Call Extra Session of Congress to Give Filipinos Independence." New York Times. 9 August 1900. http://query.nytimes.com/mem/archive-free/pdf?_r=1&amp;res=9E06E4D9143DE433A2575AC0A96E9C946197D6CF

Posted by Jesusa Bernardo at 1:28 PM