AS A former political prisoner and member of SELDA (Samahan ng Ex-Detainees Laban sa Detensyon at Aresto) and as Chairperson of the International League of Peoples’ Struggle (ILPS), I salute and congratulate the SELDA, its current officers and all members for their struggle for the democratic rights and freedom of all the political prisoners since the founding of SELDA on December 4, 1984. 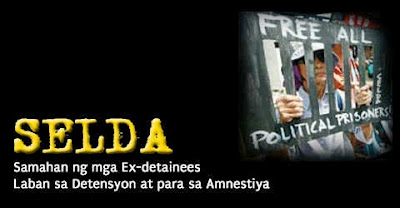 I am proud to say that even while I was still a political prisoner I was consulted about the founding of SELDA. Since then, SELDA has become the most outstanding organization in the Philippines in defending the rights of political prisoners, working for their release and mobilizing moral and material support for them and their families before and after said release.

Known all over the world is the great success of SELDA in pursuing the human rights litigation against the Marcos estate in the US court system and in documenting the victimization of close to 10,000 Filipinos who suffered extrajudicial killings, forced disappearance, torture and illegal detention during the Marcos fascist dictatorship.

Without the work of SELDA, the case against Marcos would not have succeeded. But certain elements have sought to deny the role of SELDA and make a scam for their political and material benefit, going to the extent of excluding 2000 documented victims (including prominent political prisoners and former officers of SELDA) and replacing them with fake claimants in order to spite SELDA.

It is ironical that the reactionary government which has continued the Marcos policies of puppetry to imperialist powers, corruption, plunder and human rights violations and which has never done justice to the victims of human rights violations from the time of Marcos to the present is posing as the possible dispenser of justice and the possible provider of resources for indemnifying and rehabilitating the victims and their families.

In the course of the GRP-NDFP peace negotiations, I have warned several times that the failure to do justice to the victims of the Marcos regime compounds the injustice to them and their families and serves as strong cause for revolution. But from one reactionary regime to another, we have seen the ceaseless exploitation and oppression of the people and the infliction of the worst human rights violations on those activists who seek the national and social liberation of the people.

The reason for the existence and further development of SELDA is the continuance of human rights violations and the need to fight for the basic democratic rights and fundamental freedoms of the people. And it is fine that among the human rights organizations, SELDA is focused on defending the political prisoners and seeking their release and rehabilitation. 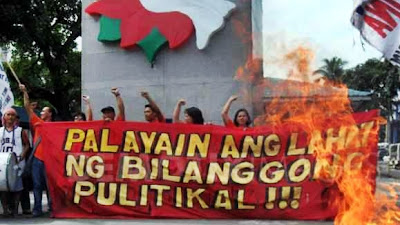 These political prisoners are being detained in violation of the International Bill of Rights, the International Humanitarian Law, the Comprehensive Agreement on Respect for Human Rights and International Humanitarian Law and the Hernandez political offense doctrine. On the charge sheets, they are accused of participating in the rebellion of the revolutionary forces of the people and yet they are detained and penalized for common crimes. Among the political prisoners are those protected by the GRP-NDFP Joint Agreement on Safety and Immunity Guarantees (JASIG). Yet they are not released, thus causing the paralysis of the GPH-NDFP peace negotiations.

The Aquino regime claims to be different from the Arroyo regime. But in fact the Aquino regime is not different. It is hell-bent on continuing the Arroyo policies of puppetry,, plunder and gross human rights violations. It is keeping the political prisoners of the Arroyo regime and it is adding its own. It is increasing the number of those unjustly arrested, imprisoned , tortured and murdered by its military and police forces under Oplan Bayanihan.

SELDA carries forward a just cause that enjoys abundant support in the country and abroad. We are gratified that whatever are the odds, the SELDA is doing the best it can in order to obtain justice and indemnification for political prisoners and other victims of human rights violations. We must stand in solidarity with the SELDA and support all its efforts in fulfilling its noble mission. ###