JUSTICE for GREGAN CARDEÑO MOVEMENT: Findings of the Mission

FINDINGS OF THE FACT FINDING MISSION 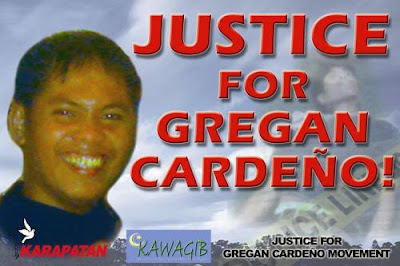 Background of the Mission

On February 03, 2010 around 2:00 in the afternoon, Cardeño Family was informed by SPO3 Ali Guibon Rangiris, PNP-Marawi, that Gregan V. Cardeño, 33 years old, interpreter of US troops (JSOTFP-Balikatan) in 103rd Brigade, PA, Camp Ranao, Datu Saber, Marawi City committed suicide by hanging himself in his room in the barracks of US troops whom he work for as interpreter.

Unidentified US troops brought the cadaver of Gregan from Marawi City and arrived in Zamboanga City on February 03, 2010 around 4:00 in the afternoon. Cardeño family met the cadaver at La Merced Memorial Homes and observed several puncture wounds, contusions and hematoma in the head of the cadaver.

Cardeño family doubt that Gregan committed suicide because the victim had prior conversation to his wife and sister, confessing that he was not brought in Cotabato, instead to Marawi City and the nature of his work is inconsistent to what he is asked to do when he arrived in US barracks in 103rd Brigade, PA. The family also doubts the report of PNP and US troops because of the wounds they saw during autopsy of the cadaver.

The family sought help from KAWAGIB and Inpeace-Zamboanga to assist them, conduct investigation and file complaints to appropriate body for the prosecution of the case.

On February 25, 2010, the Cardeño family, KAWAGIB and Inpeace-Zamboanga organized the JUSTICE FOR GREGAN CARDEÑO MOVEMENT to collectively work in search of truth on Gregan’s death, gather support from public, and launch campaigns and mobilizations for prompt investigation and justice for Gregan and his family.

Objectives of the Mission

The Fact Finding Mission is aimed at interviewing the government authorities/personnel (PNP, AFP) especially the US troops in 103rd Brigade, PA to shed light on the issues and questions regarding the mysterious death of Gregan and have an ocular visit to the place of incident.

Conduct of the Mission

Delegates from Zamboanga met CHR-Iligan delegates headed by OIC Director Faruk Batara, Ms. Marie Hilao Enriquez of KARAPATAN and youth delegates from Iligan converged and departed around 8:45 am and arrived at 9:40 am in Marawi City. Delegates converged and had orientation, groupings and preceded to PNP, and 103rd Brigade, PA where US troops is staying.

PNP-Marawi facilitated and presented to the FFM team, some evidences of the case while FFM team (in two vehicles) assigned in 103rd Brigade were stopped by soldiers on duty at the juncture of Camp Ranao. After 20 minutes of negotiation, only the family, leaders of the mission, media and a few participants of the mission (in a van) were allowed to go inside 103rd Brigade. Outside the first building of the brigade awaits Deputy Brigade Commander of 103rd Brigade, Col. Felix Castro together with Capt. de Leon, Officers Poblacions, Dumlao, Muscad, Hamlag, Cantiga and a Military Police. The team introduced its members and was made to sign a logbook, the team observed that the soldiers are tight in security. Minutes later, dialogue with Col. Castro started. Around 10 minutes later, team leader of US Forces Capt. Kay (US Army)and Donnelly (US Navy) arrived from somewhere at the back of main building, the two introduced themselves. Family of Gregan and other delegates started asking Capt. Kay
about Gregan and his death. Capt. Kay at first seemed to be open to queries though he doesn’t answer the questions directly while Donnelly kept on texting.

But after a few minutes, when Capt Kay cannot answer anymore the questions, he and Donnelly walked out. The FFM team especially Gregan’s sisters felt insulted on what the US troops did. A soldier in uniform and another one not in uniform took photos of the FFM team.

Gregan’s relatives asked Col. Castro if they can atleast have a glimpse of where Gregan stayed or just from the main building where the US barracks is, but they were denied by Col Castro saying he can’t because they are not allowed.

Findings of the Mission

After conducting a simultaneous interview with the three groups (PNP, 103rd Brigade and the US Troops) the FFM team observed the following:

• Conspiracy to conclude that the cause of death is suicide and conceal facts tending to prove otherwise.

- Upon questioning of the FFM team SPO3 Ali Guibon Rangiris admitted that they only conducted a cursory examination of the body.

*they did not take with them the bed sheet allegedly used by the victim to hang himself.

*the cellular phone of the victim was left unsealed. He told the FFM team that they found the phone empty (phone book, inbox/outside messages, pictures) while in fact SPO3 Ali Guibon Rangiris used the said phone to contact a family member on February 3, 2010 at around 2:00 in the afternoon to report that they found Gregan hanging inside his room.

*Gregan’s body was left by the Police to the care of the US troops upon the insistence of the latter that they will be the one to send the body. - The Photos taken by SPO3 Ali Guibon Rangiris showed that the victim was wearing green T-shirt, Maong pants with his underwear partially shown. On the contrary the cadaver was delivered at La Merced Memorial Homes in Zamboanga City and when the family opened the body bag filled with ice cubes the cadaver was without shirt and wearing only a camouflage cargo shorts.

?? Reporting of the incident:

• The contradictory statements of the two commanding officers: Capt. Kay and Col. Felix Castro Denial of liabilities both on the death of Gregan and civil liabilities of US troops and 103rd Brigade, PA

- Capt. Kay asserts that they work in close coordination with Col. Castro as their counterpart in activities they hold within 103rd Brigade command. In contrary, Col. Castro keeps on denying that he is informed of all the activities of the US troops.

- Capt. Kay said AFP hired Gregan as interpreter to US troops. Col. Castro said they only knew of Gregan’s presence inside the camp on Wednesday when Capt. Kay informed him of Gregan’s death

- Capt. Kay further asserts that Skylink is the one to answer all questions regarding Gregan’s employment and death. - Col. Castro, said he is not knowledgeable on who are coming in and out in relations to the US troops activities.

1. Based on the result of the fact finding mission, filing of appropriate actions for the prosecution of the case is strongly recommended.

2. The House of Representatives should conduct Congressional Inquiry in aid of legislation to clarify jurisdictions over criminal and civil cases committed by US troops.

3. For the US Embassy to open the barracks of US troops where the body (of Gregan Cardeno) was found dead.

4. For the abrogation of the Visiting Forces Agreement. 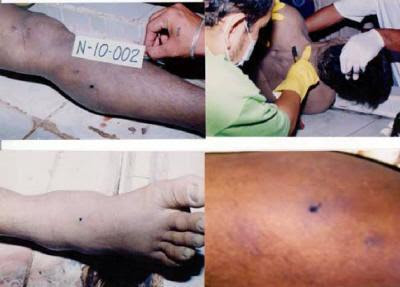